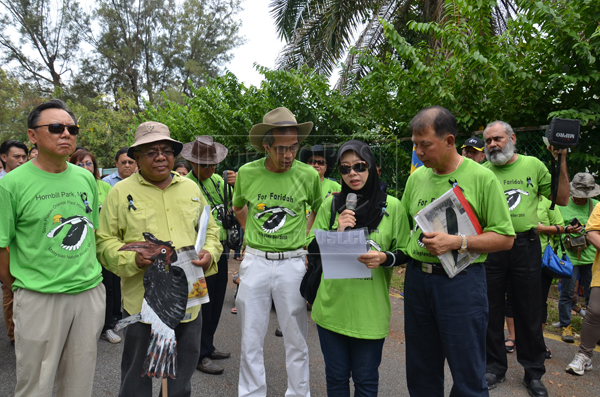 MIRI: Hundreds of nature lovers from all walks of life, including from Bintulu and neighbouring Brunei, joined Mirians on Sunday for the 5th Hornbill Walk at Piasau Camp in memory of Faridah, one of the totally protected hornbills at the camp that was found dead on Sept 26.

It was also in appreciation of the government’s decision to gazette the camp as a nature reserve by the year-end if there is no objection.

The announcement by Assistant Environment Minister Datu Len Talif Salleh on Friday in Kuching came a day after nature lovers were united in grief over the tragic death of Faridah at Piasau Garden just metres away from Piasau Camp.

Ting, while thanking the government for the decision, urged the people to continue supporting all efforts to make the nature reserve a reality and a success.

“We thank everyone involved including Musa who is the prime mover and among those who dedicatedly carried out survey of the flora and fauna here and had given so much information on the study.

“The media, particularly newspaper reporters, had managed to gain the people’s attention, Shell, Petronas and the state government especially in highlighting the death of Faridah, which led the government to gazette this camp as nature reserve by December 2013,” said Ting. Meanwhile, when acknowledging the strong support of the authorities and the people, Musa reminded that there was much more to be done for the conservation of the flora and fauna in the camp.

“The people too must understand the respective roles of the relevant agencies, the police, Sarawak Forestry Corporation and the government. Let them do their work and we do our roles as citizens,” he said.

During the gathering, eulogies for Faridah were read by Robiah Tani, Polycarp and Zainuddin Ibrahim, which touched the hearts of many, with several people seen shading tears for the doting mama bird.

The moment was both solemn and happy although most of those who came either donned the specially-designed T-shirt in memory of Faridah or Save Piasau Camp T-shirt, while Piasau Animal Welfare Support (Paws) distributed black ribbons with a portrait of Faridah and gave away free limited edition of photographs of the hornbills.

Others came with banners applauding the government’s decision as well as condemning poachers.

To further enlighten the participants on hornbills, there was a quiz session where six lucky winners received special cut-out hornbills besides a tree planting event and visit to the artificial nests.

At the same time, there were sales of t-shirts and collection of petitions. Several others later joined in the walk to watch the hornbills and other wild birds.

Meanwhile, the 6th Hornbill Walk at the camp will be held on October 19 at 4pm, with the starting point at the car park fronting the former Tenby International School.

All are welcome and entrance is free.