Wednesday, July 6
You are at:Home»News»Sarawak»Dangerous-weapons bust in Serian 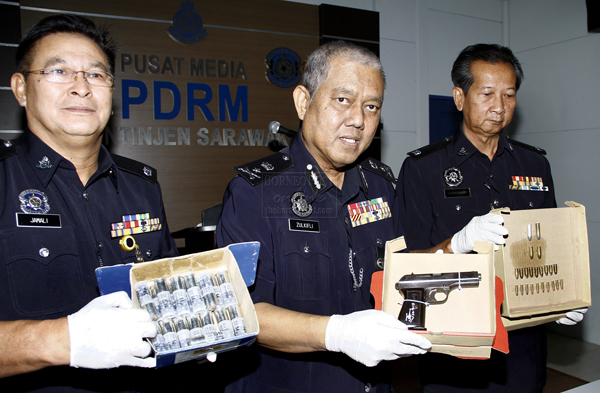 WEAPONS BUST: (From left) Jamali, Zulkifli and Sarifuddin with some of the items recovered from the house and store in Serian. — Photo by Chimon Upon

KUCHING: Police found an assortment of dangerous weapons, including a loaded automatic pistol, rifles and live bullets, during a raid on an oil palm plantation in Serian earlier this week.

They are now looking for 35-year-old Sabah-born Kueh Fook (Mykad No: 780801-12-5015) to facilitate investigations into this shocking find. His last known address is No.161C, Hui Sing Garden, Kuching.

State CID chief Datuk Zulkifli Hassan said acting on information received, police raided a workers’ quarters, which was not occupied at the time, and stumbled upon the dangerous weapons.

He told a press conference at the state police headquarters here yesterday that among the items found at the workers’ quarters were a homemade shotgun, a 12-bore shotgun cartridge, a signal flare, an air rifle, eight boxes of air rifle pellets, two ‘kwang tao’ swords, a syringe, and two homemade apparatus to consume drugs.

“We have classified our investigation under Section 8(a) of the Firearms Act 1960 and Section 7(1) of the Corrosive and Explosive and Dangerous Weapons Act 1958.

On the progress of ‘Ops Cantas Khas’ in the state, Zulkifli said 344 people, including former Emergency Order detainees, had been arrested between Aug 17 and Oct 3 for various offences.

“We have conducted checks on 14,965 persons and 12,572 vehicles, and have issued 1,105 traffic summonses. Overall, however, there is no need to worry as the level of gangster-related activities in the state is under control and not serious.”