Wednesday, October 20
You are at:Home»Columns»Perspective»Make way for the VIPs 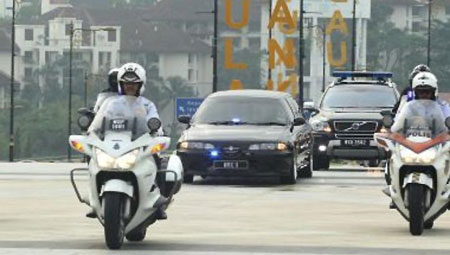 RECENTLY a minister berated Malaysian drivers for not giving way to outriders escorting royalty and VIPs. The minister was reported to have said that drivers should give way as the people that are being escorted needed to get to their destination on time to perform their official duties. He went on to say that that was a sign of lack of respect.

“We must put a stop to this, showing respect to our leaders is part of our culture,” said the minister.

I was quite taken aback by this statement. Though many of us are somewhat irritated by the “eeoo, eeoo” sound announcing the presence of VIPs on the same stretch of road as we ordinary mortals, generally, we obediently pull to the side. In truth, we don’t have much choice: the intimidating presence of uniformed personnel (and armed as well, I believe) on powerful motorbikes blaring out sternly through equally powerful loud hailers “beri laluan” (give way) is enough to make even the most obstinate comply to the order.

The sight of road users scattering and parting to form a through way for the very important entourage like the Red Sea parting to allow passage to Moses reminds me of a song from the movie ‘Aladdin’, which goes like this:

“Make way for Prince Ali Say hey! It’s Prince Ali Hey! Clear the way in the old Bazaar Hey you! Let us through!”

Sure, some of us might have complained quietly under our breath but as far as I know none dare to demand their right of way as per the traffic signal. So, like the people in the Old Bazaar of Baghdad, we scattered to make way.

The minister talked about inculcating the culture of respect. Well, there is a saying “respect has to be earned, not demanded”. If indeed some Malaysian motorists are not showing respect to the leaders perhaps it would be better for the good minister to try to find out why, and to work towards earning back that respect.

Anyway a culture of respect cuts both ways. I don’t think it is respectful for leaders (or at least their escorts) to act like bullies and apparently intimidate the honest road users.

Sure, I agree that VIPs should not be late when on official duties. But why can’t they be like ordinary citizens who wisely factor in the distance to the venue and the traffic conditions along the way.

As far as showing respect is concerned, I know as a fact that event organisers make special effort to honour the VIPs. At all functions, the ordinary guests are asked to arrive at least 30 minutes before the guest-of-honour. The master of ceremonies is specially instructed to say, “Ladies and gentlemen, please stand up to welcome our guest-of-honour . . .” so that the VIP can make his grand entrance to thunderous applause.

Talking about official functions, we all know when it begins but when does it end? I accept the rationale that VIPs need a phalanx of outriders with siren screaming to clear the way while they are on the way to official duty. But do they really need to repeat the rather annoying “eeoo, eeoo” and “beri laluan” ritual when they are on their way home after the function?

Last year I was at the official opening of a heroes cemetery. There were a number of ministers there. After the ceremony, we retired to have some refreshments. Then it was that the “make way for the VIP” routine again. Why? I am not sure if they were in a hurry to be anywhere apart from home. I don’t think they were in any kind of hurry, for a few minutes before we were casually having tea and having pleasant conversation.

Even so I would not begrudge these important people availing themselves to the police escort post event. However, what I find it objectionable is when people abuse their position.

Some years ago, I happened to be at the ferry crossing. That was before the completion of the bridge spanning the Kayan River in Lundu. The waiting line was almost 1km long. It was a weekend. Then a vehicle blatantly jumped the queue and cut right to the front. I looked at the police and mouthed “Why?” (They used to station police officers at the ferry point on weekends).

He pointed to the SG (Sarawak Government) licence plate of the car and shrugged. A few minutes later a couple of cars driven by some muscular tattooed individuals did the same thing. Again I looked at the officer. This time he looked at the tattooed arms and shrugged. Hmm, interesting, a coincidence of ‘little Napoleons’ and ‘big brothers’ – all considered themselves above the ordinary citizens.

Rudyard Kipling, in his poem ‘If’, advised, “… walk with Kings – nor lose the common touch”. Sound advice indeed.

I am sure if our political leaders were to share some of the experience of the ordinary people like traffic jams, dirty toilets, etc, then they would be able to fulfil their pledge to serve the rakyat better.