Sunday, September 25
You are at:Home»Features»Santubong over time

LEGENDARY MOUNTAIN: Gunong Santubong continues to draw visitors from near and far. 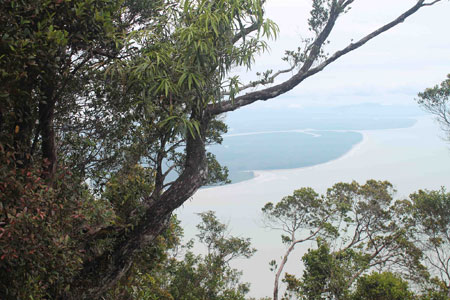 VANTAGE POINT: The view from the top of Gunong Santubong. 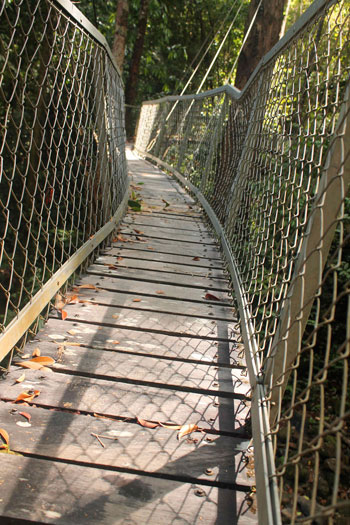 CROSS OVER: A swinging bridge along a Gunung Santubong trail.

Geologically Gunung Santubong is a sandstone mountain that has risen to be over 800 metres, in recent (in geological terms) times.

This does not take the mystery from the mountains, nor it’s mythical origins, which has been immortalised in the song ‘Puteri Santubong’.

The mythical origins of Gunung Santubong and its sister mountain Gunung Sejinjang are founded in the conflict between two beautiful sisters, who in some versions of the myth fight over a man and in others over who was the most beautiful.

Puteri Santubong was a skilled weaver and her sister, Puteri Sejinjang, skilled at pounding padi. A padi-pounding pestle thrown by Sejinjang, whose head in turn was split becoming the islands that ring the coast, killed Puteri Santubong.

The King of Heaven was so cross that he condemned the sisters to remain on earth as mountains.

In other versions of the myth, the King of Heaven sent the princesses to earth to stop fighting between villages; this accomplished, they started fighting over who was the most beautiful resulting in their demise.

The early history of Santubong is as enticing as its mythical origins.

Archaeological evidence strongly suggests that in the vicinity of present day Kampung Santubong, a traditional fishing village at the foot of the mountain, a thriving port with extensive iron workings existed from the 10th to the 14th century.

Dense reefs of iron slag (left over from working with iron) mixed with pottery shards from the Tang Dynasty (618 to 906 CE) have been located in the Sungai Jaong about 2km from Kampung Santubong.

In 1966, the then curator of the Sarawak Museum, Tom Harrisson excavated a Bongkisam Shrine, which had architectural similarities to other Buddhist-Hindu shrines of the era.

Dr Alfred Russel Wallace – the famed contemporary of Charles Darwin who is being commemorated this year, as it is his 100th anniversary of death – wrote ‘The Sarawak Law’ while staying at Santubong in 1855.

Wallace, in his discussion on evolution, wrote “Every species has come into existence coincident both in space and time with closely allied species.”

Gunung Santubong, which was gazetted as a national park in 1998, still stands as a beacon clearly visible from the coastal islands and far out to sea.

Its forest clad slopes attract visitors from far and wide to breathe in fresh air, to accept the challenge of reaching the 810-metre summit and to clamber up (and down) rope ladders that traverse the near 90 degree cliffs along the summit trail.

The jungle trail, no less beautiful, which takes visitors on a loop of the lower slopes, has a couple of entry points along the Damai-Kuching Road.

The landscape has been and is changing. Beach resorts line the clear white sand beaches and several private homes have been built along the lowest slopes of this magnificent mountain.

It is hoped that the Santubong Nature Festival will:

For more information on the Santubong Nature Festival and coming activities, visit the festival’s Facebook page or email mnskuching@gmail.com.

A beacon of light Walking, hiking and talking Sayang Santubong.