Wednesday, February 8
You are at:Home»Features»The day the insurgency ended
For the freshest news, join The Borneo Post's Telegram Channel and The Borneo Post on Newswav. 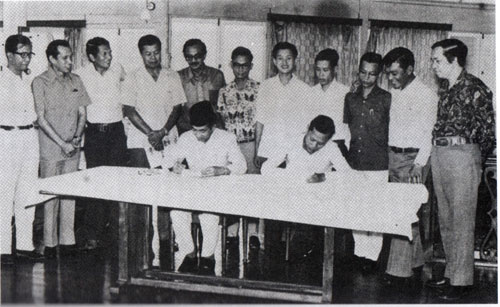 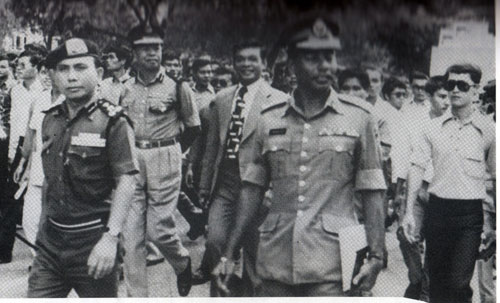 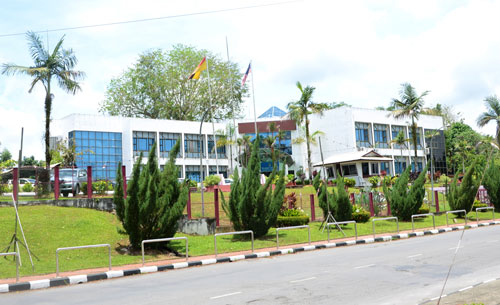 HQ AND ADMIN CENTRE: The present Resident Office is the divisional headquarters and administrative centre for Sri Aman Division. 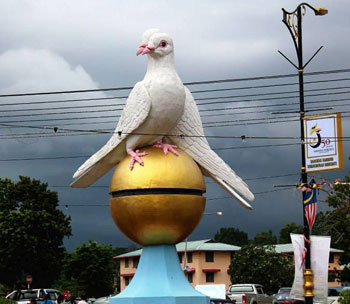 PEACE SYMBOL: The statute of two pigeons symbolising Peace after the signing of MoU between the government and PARAKU. — Photo courtesy of Phang Chin Seng.

NOT many people know about the Peace Declaration of Sri Aman and how it came to be — and also the significance of Oct 20, 1973, in the history of Sarawak.

On that date, two historically significant events took place. First, it marked the end of the communist insurgency in the state with the surrender of the director and political commissar of Pasukan Rakyat Kalimantan Utara (Paraku) Bong Kee Chok and his comrades.

Secondly, the town of Simanggang was renamed Bandar Sri Aman and the divisional administrative centre, Sri Aman Division. Aman means Peace taken from the significance of the Peace Declaration.

thesundaypost recently spoke to former senior police officer and Deputy Commissioner of Police Sarawak Component Dato’ Sri Alli Kawi on his contributions to and role in the eventual surrender of Bong Kee Chok and his comrades upon the signing of the Memorandum of Understanding (MOU), signifying the beginning of the end of the insurgency in Sarawak whereby over 500 armed communists laid down their arms and returned to society.

“This success is unprecedented and unparalleled in any part of the world. According to the military intelligence at that time, the success of Sri Aman had saved the Malaysian government RM1.5 billion in operational expenditure,” Alli said.

At the height of the insurgency, Alli was head of Special Branch Sarawak in early 1973 and also an assistant commissioner.

“I was also the first local and Malay officer to hold this post after Sarawak gained independence through Malaysia. The insurgency which had been a decade old had seen many atrocities and many big scale military operations,” he recalled.

According to him, there were many casualties on both sides — and the biggest one on the government side was the communist ambush on the army camp at Biawak, Lundu, where several soldiers were killed.

The communists were most active in Kuching and Sibu Divisions.

“It was challenge for me, being a Malay, to deal with a basically Chinese problem, so to speak. However, that did not deter me as I was enthusiastic and had confidence in helping to solve the problem.”

The first thing Alli did in his first day in office was to meet every staff officer in the Special Branch, particularly the one in charge of the communist problem.

He was deeply puzzled by the lacklustre attitude of his officers generally and wondered what the main cause was.

In his desperation to search for an answer, he called for a briefing note, and to his horror and shock, the insurgency was referred to as a Protracted War.

“This was the main cause of the lacklustre and lethargy. Protracted War was taken to mean interpreted war and the officers believed it to be an unending war.”

Alli told all his officers to immediately stop referring to the insurgency as Protracted War and sent out a circular, prohibiting them from using this term.

In all readiness to face the challenge, Alli told his men any important and good information should be bought to his attention immediately and prompt action would be meted out to deal any unnecessary delay.

In every SB office, a placard — Strike While The Iron Is Hot — was displayed.

His philosophy of psychology was based on reading several books on psy-war and guerilla warfare.

Alli set up a Psy-War Unit in the Special Branch and Sarawak was the first and only state to introduce and establish such a unit.

“It was not even included in the SB Charter. The unit was responsible for producing and distributing leaflets and also conducting various activities to win the hearts and minds of the rural people,” he said.

“Our team became popular and liked by the rural people,” he added.

The unit was headed by a staff officer (the late DSP Saw Ah Khaw) and assisted by Inspector (SAC) Dato’ Benjamin Hasbie.

Alli was constantly reminded of the saying — know your enemy and you will win a thousand battles.

He realised he had solved the problem when the attitude of the officers changed.

“The routine mindedness began to disappear and the officers started to work in earnest and in a state of urgency.”

“The two worked extremely well as a team. They were both very dedicated, resourceful and committed. They were supported by a number of good and brave men on the ground in the persons of Dennis Bong, John Luk, Chen Yiew Zean, Awang Yahya and Lim Thiang Seng.”

Alli said these men served the country extremely well and they were not only dedicated, hard-working and committed but they also very brave.

“For me, it was a joy, pleasure and privilege working with these officers,” he acknowledged.

According to Alli, a breakthrough came in July 1973 when information was received from Serian of the enemy presence in the area.

A joint SB and army operation was mounted but unfortunately, it did not achieve any major success.

“However, we managed to cause the enemy to escape to Simanggang. In September 1973, we received reports that the enemy group was already in Simanggang,” Alli said.

The Simanggang Divisional officer at that time was ASP (AC) Jeffrey Peron whom Alli described as good, hard-working and dedicated officer.

“We made full use of the force we had on the ground — the general duty men, border scouts and the field force — to carry out the operation and the roadblocks at various strategic places.

“Psy-war was in full swing. We dropped leaflets and used boats to broadcast our appeal to the enemy group to surrender. At that point, two communists — a husband and wife — surrendered.

“Not long after the surrender, a communist courier on his way to Kuching was arrested at a roadblock near Pantu on October 12, 1973. Another was picked up at the Simanggang-Sibu border,” he added.

Both the insurgents were brought to Kuching. The letter they carried was quickly translated by the late Mr Chen, a Hong Kong Chinese, who had worked as a translator for the Special Branch for many years. It was addressed to the Chief Minister.

“When Mr Chen passed the letter to me, he was trembling with excitement and almost in tears. He was one of those made to believe in the so-called Protracted War, the unending war. He never thought that it was going to end,” Alli added.

Alli too was excited and in a state of disbelief as he never expected the insurgency to end so soon.

On receiving the letter, Alli quickly informed the Commissioner of Police, Dato (Tan Sri Datuk Amar) Hamdan Sirat, who instructed him to see the Chief Minister, Datuk (Tun) Abdul Rahman Ya’kub, who was then warded at the General Hospital Kuching.

When Alli passed the letter to the Chief Minister, the latter decided to return to his house to see the courier. It would seem the letter acted as an “instant cure” for him.

Alli took the courier to see Rahman Ya’kub at his house the same evening and from then on, preparations were made for peace talks between the federal government, headed by the Chief Minister of Sarawak (Rahman Ya’kub), and Bong Kee Chok, director and political bommissar of Pasukan Rakyat Kalimantan Utara, the armed communist organisation operating in the jungles of Sarawak.

Bong Kee Chok and his comrades came out of the jungles on October 18, 1973 and negotiations started from this date.

“Bong Kee Chok had passed his Senior Cambridge. He wanted to study law and applied for a government scholarship. Due to his involvement with the communist movement in Sarawak, the then colonial government refused to give him the scholarship,” Alli recalled.

“Due to this failure to get the scholarship and his involvement with the communist movement, he joined the guerilla group.”

Speaking and discussing with Bong Kee Chok in English, Alli was able to express Bong’s feelings and genuine desire to seek peace and restore normalcy in Sarawak. Both discussed home and international affairs.

Alli pointed out to Bong that he not only did not have support from the people of Sarawak but also external forces.

“Both of us had very frank and fruitful discussions.  There was no sign of animosity and towards the end, we emerged like old friends,” he recalled.

For Alli, the negotiation was an “extremely wonderful experience” — incomparable with any other negotiation he had done before.

Before the meeting and the MoU signing, the Chief Minister and his team were housed at the former Resident’s quarters on the hill whereas Bong Kee Chok and his comrades were accommodated at another government quarters below the hill.

During negotiations, Alli had to shuttle between the two quarters. As the main negotiator, he never allowed the two parties to meet until all the terms raised were mutually agreed.

Through wit, wisdom and a friendly approach, Alli succeeded in persuading Bong Kee Chok to agree to the signing of the MoU on Oct 20, 1973. That was how Simanggang was renamed Sri Aman.

To Alli, the negotiation was tough as it had not been easy to persuade the communists to end the insurgency. But he was determined to make a success of the peace-making. He did not wish it to end in failure.

Initially, Bong Kee Chok and his comrades did not feel comfortable and were inclined to be suspicious. With assurance and demonstration of sincerity on Alli’s part, they became more relaxed, com-fortable and friendly.

Forty years after the success of Sri Aman Peace Talk and with an excellent record of almost 24 years’ service in the police, Alli remains one of the few SB officers who has never received an award until today from the federal government for his contributions to and role in Operation Sri Aman.

He said not only the younger generation should know and appreciate the struggles, sacrifices and good deeds of the older generation, the government too should acknowledge and give due recognition to them, and above all, not forget them.

However, Alli is proud and satisfied that Sarawak remains peaceful 40 years after Operation Sri Aman and that this peace is enjoyed by the people regardless of their race, creed or age.

If nothing else, Alli hopes people, in whatever capacity in society, will always do their best to treasure the existing peace and harmony for the love of the state and country.