Tuesday, July 5
You are at:Home»News»Sarawak»Villagers living in fear of gangsters 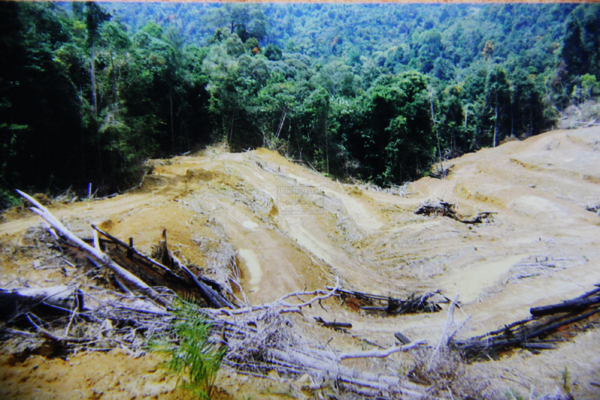 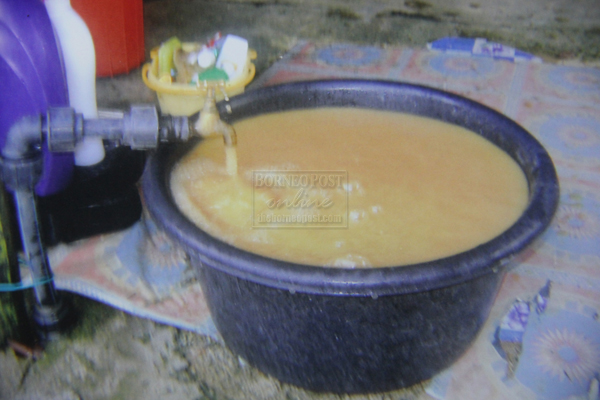 UNSAFE: Water from the gravity feed came out murky, making it unsuitable for drinking and bathing.

KUCHING: About 800 residents of eight villages around Melikin and Karangan Melikin, located in Balai Ringin, some 100 km from here, are living in fear of constant harassment by thugs who encroached into their water catchment area to log the area illegally.

A spokesperson for the affected villagers told The Borneo Post yesterday the gangsters were apparently engaged by the company involved in the illegal logging to intimidate the villagers and guard its operation.

The illegal logging has polluted their water supply turning the water murky and rendering it unsafe for drinking and bathing.

The Kpg Melikin water catchment area was gazetted following the completion of its gravity feed project on Aug 13, 2011.

The villagers confronted the workers of the logging operation sometime in June but their protests were ignored.

To add insult to injury the villagers were stopped by the workers and their guards from entering the area to collect jungle produce.

“The company disturbed the peace in our villages after they hired gangsters who resorted to violence using firearms to oppress and provoke villagers. Some of us were threatened while those who had stood against them were assaulted.”

The spokesman said despite making reports at the Serian police station nothing had been done to protect the villagers from the gang.

On Oct 15, a group of thugs seized an excavator belonging to a plantation company operating at an estate nearby and workers of the company who went to check on their machinery ended up being chased by the gangsters who came in four pick-up trucks.

A representative of the plantation company who accompanied the villagers said, “We received a call at about 5.30pm saying that our excavator was seized by unknown individuals. At that time two of our estate vehicles carrying five personnel were already on their way to the site. We heard a gunshot as we arrived at the estate.

“Then we saw four Toyota Hilux vehicles coming our way at high speed. Fearing for our safety, we fled the area. While making our way out, one of our vehicles was deliberately rammed. Our personnel inside the rammed vehicle reported that during the chase, three shots were directed at our vehicles with one bullet penetrating one of our pick-up trucks,” said the plantation company representative in the interview.

He added that the intruders managed to stop one of the company’s vehicles and assaulted its staff using an automatic pistol butt. The thugs then proceeded to assault other villagers in the vicinity.

One villager who was present yesterday claimed that he was assaulted by the same group of gangsters after they rammed into his motorcycle. The thugs got off and beat him with iron rods and wooden sticks.

The villager believed he was targeted because previously, he had warned workers from the company from encroaching into their water catchment area.

He mentioned that other villagers with him at the time managed to flee the scene. However, another villager was assaulted in the 7pm incident. Both the plantation company and assault victims had made their police reports.

A police report was also made before Oct 15 after the thugs went to the villages in search for some individuals.

The spokesperson also mentioned that the villagers had accompanied officers from the Forestry Department including General Operations Force personnel to inspect the water catchment area on Oct 29.

The spokesperson added that villagers had erected a gate (last Sunday) to stop lorries carrying logs from using their tar sealed road stretching from the Tanah Mawang junction to Karangan.

Headmen from the affected villages had signed and sent a petition to the Serian district Public Works Department requesting for the lorries to be barred from using the road.