Tuesday, July 5
You are at:Home»News»Sarawak»Over to Bukit Aman, MACC 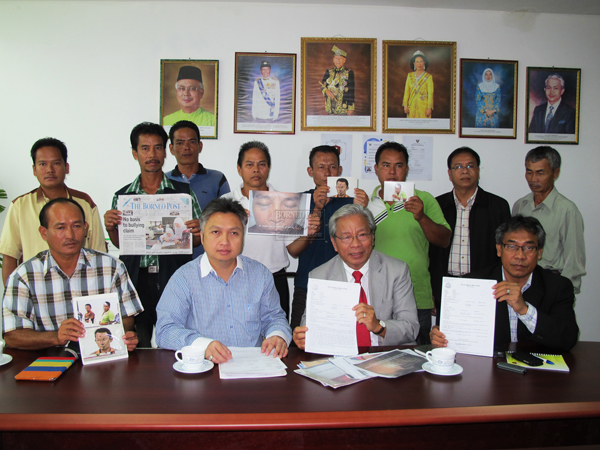 DEMAND FOR ACTION: Masing (second right, seated) and Snowdan (second left, seated) pose with the NCR land owners of Melikin with some showing photos of assault victims and police reports they made .

Minister to hand over complaints, police reports of assault on villagers to Kuala Lumpur

KUCHING: Minister of Land Development Tan Sri James Masing has decided to hand over detailed account of the alleged intimidation and assault of villagers at Melikin by gangsters hired by plantation companies to the Bukit Aman Police Headquarters and Malaysian Anti-Corruption Commission (MACC).

He made the announcement after meeting a 10-man delegation including five Tuai Rumah from Melikin led by Balai Ringin assemblyman Snowdan Lawan at his office at Masja in Petra Jaya here yesterday.

The villagers related to Masing their ordeal at the hands of outsiders who came into their area to intimidate and assault them recently.

After hearing their plight Masing called on the police to look into the case seriously and take immediate action to protect the locals said.

“How can you allow this to happen? I want the police to take immediate action to stop it. The state government is taking the matter very seriously.

“We cannot allow gangsters to rule this country and harass ordinary folk who try to protect and safeguard their properties.”

Alluding to Serian police chief DSP Mohd Umi’s shock over the villagers’ claim as they never made any report against assault or intimidation to the station, Masing said the bullying in Melikin was “a genuine case”,

“The fear among the people of Melikin is real. They even have photographs showing their wounds inflicted by gangsters. The police should see the pictures.”

Masing believed the Serian police did not receive any report by the villagers because the victims lodged reports at the Satok police station instead of at Serian.

“Instead of Serian police station, they reported the case at Satok. Anyway, I will make sure the police are to take action against the intimidation.”

Masing added that if disputes between two plantation companies licensed to operate in the area were the cause of the violence then it was unfair for the locals in Melikin to suffer because of their disagreement.

“I call on the people not to be afraid of intimidation. In this case, it is two elephants fighting and the grass is trampled. People are scared, but they want to protect their Native Customary Right (NCR) land.

“More importantly, I do not think the two companies need to resort to gangsterism to take care of their business,” he said, adding that the parties concerned ought to do it the civilised way.