Thursday, July 7
You are at:Home»News»Sarawak»Penans in Murum rebuild their lives for a brighter future 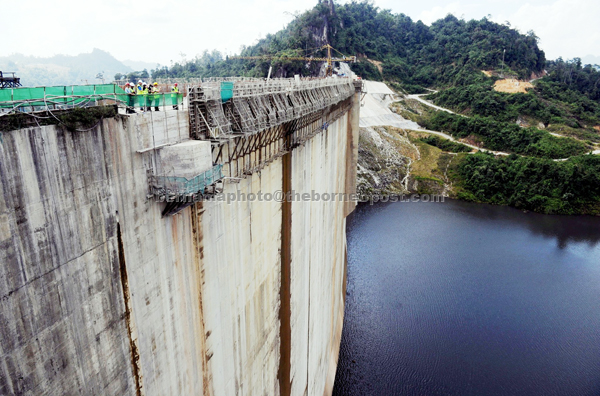 CONTROVERSIAL PROJECT: Much public debate and controversy have surrounded the construction of the RM3.5 billion HEP dam project in Belaga even as it gears for full 944-megawatt generating capacity by Feb 2015. — Bernama photo 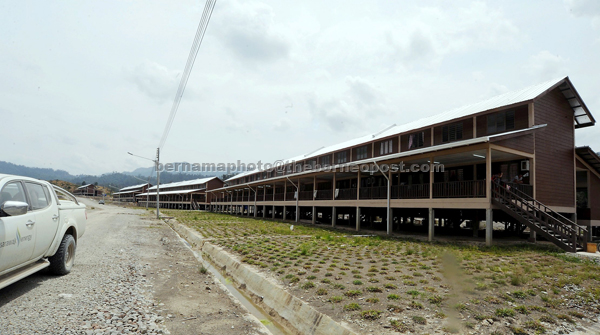 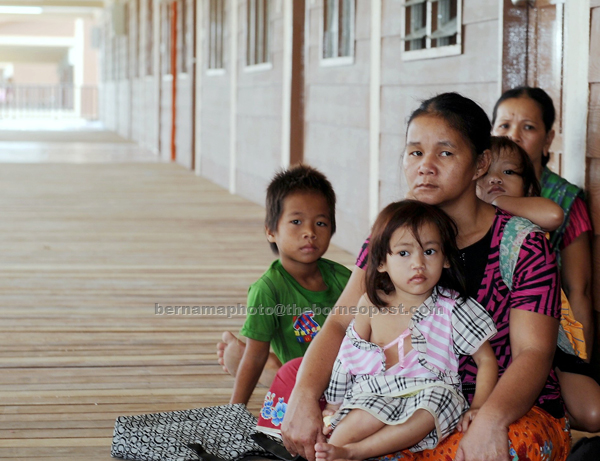 UNDER RESETTLEMENT: Under the Murum Resettlement Action Plan, the affected communities are to receive items worth more than RM600,000, which also include 15 hectares of land per household for community and agricultural purposes and forest access to wildlife and forest. — Bernama photo 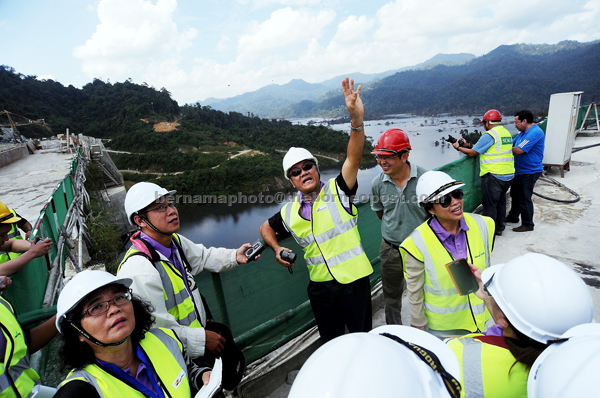 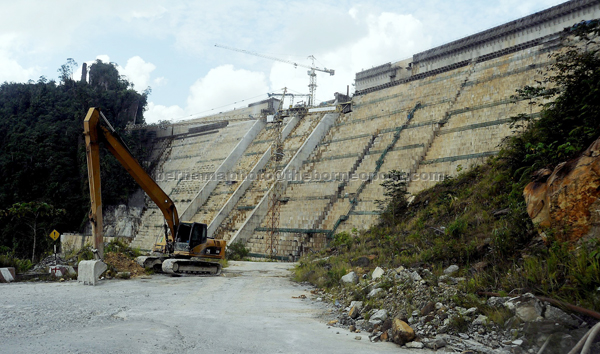 ATTRACTING ATTENTION: The so-called plight of the Penans affected by the project, being developed by Sarawak Energy Berhad (SEB) has, rightfully or not, attracted global attention over the pros and cons of resettling this once semi-nomadic tribe to make way for the dam project. — Bernama photo

MURUM: Much public debate and controversy have surrounded the construction of the RM3.5 billion Murum hydroelectric power (HEP) dam project in Belaga even as it gears for full 944-megawatt generating capacity by February 2015.

The so-called plight of the Penans affected by the project, being developed by Sarawak Energy Berhad (SEB) has, rightfully or not, attracted global attention over the pros and cons of resettling this once semi-nomadic tribe to make way for the dam project.

China’s Three Gorges Corporation is the engineering, procurement and construction contractor of the dam, situated upstream of Sarawak’s largest HEP project, the 2,400-megawatt Bakun dam in the Upper Rajang basin.

Among the many allegations by certain quarters is that the Penans will be drowned and the water level will reach them before relocation happens after the commencement of the dam impoundment on Sept 21 this year.

But Murum HEP resettlement officer Bit Surang, himself having resettled at the Sungai Asap resettlement scheme after his village was inundated by the Bakun dam, said the 245 sq km reservoir filling was a slow process that could take 14 to 18 months.

He said the process was based on clearly mapped out timelines as the safety and well-being of the affected community was SEB’s key priority, which also included the provision of basic amenities, infrastructure and programmes to help them adapt to their new environment and a more settled way of life.

One success story is that of Gilbert Kirin, 25, who is grateful for the opportunity to be trained as a facilitator by SEB to conduct the Murum Penan Literacy Programme in his longhouse at Tegulang, especially since many of the youngsters either did not go to school or had dropped out.

“Those in the 12-25 age group are very keen to learn and have already mastered reading the alphabet A-Z and can count up to one hundred. So I hope SEB will continue the programme for as long as sustainable and send us textbooks, chalks and other teaching aids,” he said when met during a recent media visit to Tegulang, Murum, about six hours’ drive on mostly logging tracks from Bintulu.

The three-hour classes are conducted at night thrice weekly as the villagers are engaged in other activities during the day, such as foraging for vegetables and jungle produce even though 25 Penan youths have now been successfully trained at the Semenggok Agricultural Station in Kuching – as part of the economic empowerment to grow their own food and earn extra income from farming.

Despite being selected to further his studies at a technical school in Bintulu after completing his Penilaian Menengah Rendah (PMR) at SMK Belaga – about one-night and one-day walking distance away from his home – Gilbert said, he opted to
drop out because his parents could not afford to visit him frequently.

He was also among the bright Penan youths from the affected area selected to undergo the agricultural training programme, organised by the Sarawak Agriculture Department, besides being sent on a two-week study tour to the peninsula, including a visit to the rice bowl of Kedah last month.

SEB social investment manager Joanne Tan said the literacy programme, as part of the company’s corporate social responsibility priorities, was her signature project given that Penan parents were normally scared to send their children to school, especially boarding schools due to obvious social factors.

Yet with their communal spirit, she said, most of the school leavers with Form Three education wanted to share their knowledge with other villagers and the programme was created to close the gap.

A contemporary ethnography survey had identified that out of 550 education-aged Penans in Murum, 517 were not attending school but close to 50 per cent of the over 330 participants were now literate and able to read
fluently and write with confidence, she said.

The literacy classes are set up in seven longhouses, including six in Murum and one in Sungai Asap, with SEB contributing RM200,000 in 2012-2013 in addition to RM70,000 to build a kindergarten in 2010 in response to a request from the Long Wat community.

“We are willing to partner with non-governmental organisations (NGOs) with the expertise on health and social issues,” she said, adding that the Penans also had some good herbal knowledge that SEB was currently exploring biodiversity documentation under its environmental management and conservation project.

The cultural and heritage aspect at the Murum resettlement sites is undertaken jointly with the Sarawak Museum, that fits in the International Hydropower Association (IHA) sustainability assessment protocol as a framework for assessing the sustainability of hydropower projects.

Agricultural assistant Henry Thomas Gulai said the ongoing 1Azam programme to eradicate poverty among the hardcore poor was supplementing the department’s effort to generate income for the Penans in Tegulang, where each family was provided with 14 hectares of land for agriculture.

“We identified what types of subsistence farming they preferred, based on their own interest, and planted fruit trees like banana, papaya and pineapple and vegetables that have been handed over to them for maintenance.

“An in-situ training with them will be held this month on agricultural management and home economics that also involves other related agencies,” he said.

With the Federal Agricultural Marketing Authority (Fama)’s assistance, there are plans to eventually sell these produce to the dam construction workers as well as at Sungai Asap while some Penans who are already operating their own sundry shops at the new longhouses and existing ones bear testimony to their new entrepreneurial capability.

In Murum itself, 44 of the Penans are already being employed by SEB to construct their own houses such as the nine blocks of two-storey structures that are equipped with three bedrooms per unit, sanitation facilities, piped water supply and electricity that is currently available from 6pm until midnight at Tegulang.

As a local Orang Ulu, whose job is to engage in community development on the ground, Bit said the Penans here admitted that the government was “kind and nice” for providing these facilities but not many were happy with their compensation, especially on the Tegulang side.

“Some NGOs are behind it (dam protests and blockades). I believe some grievances are inevitable (as in the case of Bakun) but we have solved them through negotiations and dialogues,” he said.

Similar sentiments were echoed by former Penan penghulu Pao Tului, 81, a feisty elderly and Murum Penan Development Committee member, whose language repertoire is not confined only to his own mother tongue but also extended to Iban and Malay as he conversed effortlessly with the visitors at Tegulang.

At the new resettlement village, each family is given RM10,000 ex-gratia cash payment upon relocation and temporary income support of RM850 per month from the time they were resettled.

Tegulang longhouse’s village development and security committee representative Saran Joo has requested that SEB provide 24-hour free electricity and for the government to build tarred access road as the current logging tracks are slippery when it rains and dusty when the weather is hot and dry.

“Whatever is lacking, please rectify,” he said, adding that the department had yet to build a fish pond and rear caged chicken for their consumption as part of the sustainable agricultural programme up to 2020.

Under the Murum Resettlement Action Plan, the affected communities are to receive items worth more than RM600,000, which also include 15 hectares of land per household for community and agricultural purposes and forest access to wildlife and forest produce of a total area of up to 20,000 hectares.

They are also to be given free housing of one unit of the longhouse per family of 1,300 sq ft, clean and stable water supply, electricity supply with subsidised monthly allocation of RM40 per family, free Astro Njoi package (Malaysian cable television) for every longhouse, integrated community halls with chapel and kindergarten, school, own garden plot per family and medical assistance. — Bernama