Wednesday, July 6
You are at:Home»News»Sarawak»Campaign to save Mt Sadong goes online 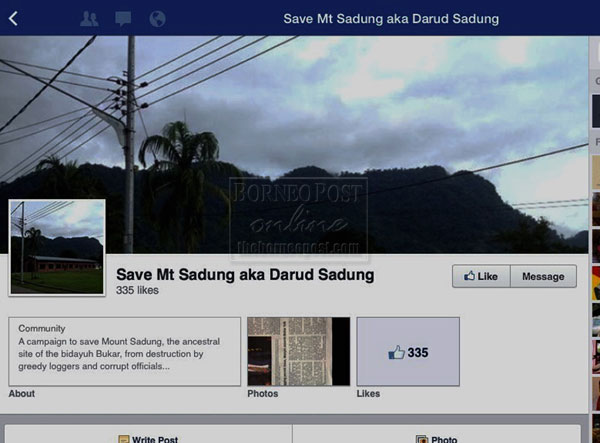 KUCHING: An online campaign via a Facebook page has now been initiated to save Darud (Mount) Sadong from destructive activities by loggers.

Called the ‘Save Mt Sadong aka Darud Sadong’, the page now has more than 300 ‘likes’ and growing since it was created soon after the protests by the Bukar Bidayuhs at one of the villages last Sunday.

The creator of the page, in his latest posting, thanked Infrastructure Development and Communications Minister Dato Sri Michael Manyin Jawong for assuring help by pledging to meet the State Forestry director to get the latter to revoke a timber licence issued to a company in February last year to extract timber from a 474 hectare area on the mountain.

“Thank you Minister, get him to revoke what he approved,” read the latest posting, alongside a photo of a news article on Manyin’s pledge.

The creator of the page, who is a professional hailing from one of the Bukar villages, however did not want his name to be published when contacted yesterday. He nonetheless hoped the page would receive a lot of support, and the authorities would take note of the feelings of the people on the ground.

Manyin, who is also Tebedu assemblyman and Dayak Bidayuh National Association (DBNA) chief advisor, told reporters on Monday that he had received the necessary information and would meet with the state forestry director within this week to resolve the matter.

Manyin also said he too felt unhappy over the news as the surrounding 26 Bukar villages depended on the mountain for their livelihood and as a water source.

Last Sunday, some 1,000 people representing the 26 Bukar villages staged a peaceful demonstration to protest the encroachment of their sacred ancestral home of Darud Sadong.

Shouting their battle cry ‘Hidup Bibukar’ (Long Live The Bukar People), they carried placards and banners expressing their concern and worry, and they called on relevant authorities to revoke the licence already issued.

Joined by several headmen from the affected villages, they had earlier attended a dialogue at Kampung Lanchang Sabai, which was presided by Temenggong Robert Sulis Ridu.

Sulis, when speaking to reporters after the dialogue, hoped the authorities take note of the anger of the Bukar people and revoke the licence as soon as possible.

“The Mount Sadong is the ancestral homeland of the Bukar Bidayuh, now comprising 26 villages with a total population of around 30,000 scattered around the sacred mountain.

“The Bukar Bidayuh people have always preserved this mountain through time immemorial. There is physical evidence of large old settlements in and around the mountain, with larger areas of fruit orchards and old farms within the area,” he said.

Logging activities were noticed by villagers of Kampung Lanchang when they saw heavy machinery at the mountain sometime last year. They also recently chased away workers who were marking trees for logging.

Mount Sadong is considered a symbol of cultural heritage and pride to the Bukar people, a Bidayuh sub-dialect group in the Serian district.

The old settlement on the mountain is said to date back even before the time of the Rajah Brooke era, making it fit to be preserved as an ancestral heritage site. Protected animals such as peacocks, hornbills and barking dears could still be found along the 1,800-metre high mountain.

Trekking activities up the mountain are also regularly organised by those who appreciate nature. The mountain also serves as water catchment area particularly for the villages of Tarat, Kakeng, Jenan, Bantang, Lanchang, Taee, Baru and Bunga.