Saturday, October 1
You are at:Home»News»Sarawak»Dam catalyst for development 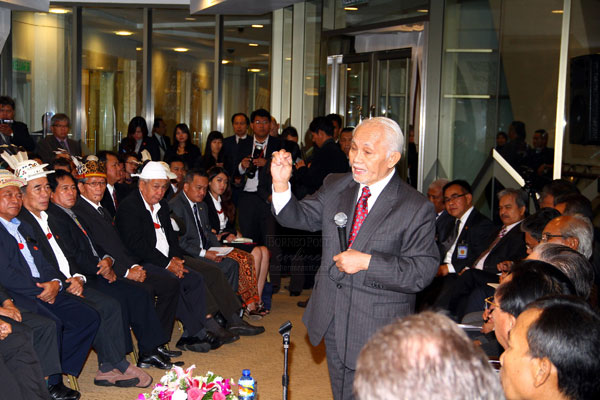 KUCHING : The proposed Baram dam will be a catalyst for better jobs and sustainable business opportunities for the people in the area especially the youths who will otherwise continue to migrate to urban centres in search of greener pastures.

Chief Minister Pehin Sri Abdul Taib Mahmud said this to Orang Ulu community leaders from Baram who met him at the State Legislative Assembly building yesterday afternoon to reiterate their support for the state government’s plans to build the dam.

Taib assured the community leaders that the government would ensure that those affected by the dam construction would be moved to resettlement areas with better facilities and living condition than their present area.

He urged them to speak up against propaganda spread by NGOs with agendas that do not serve their interests.

“I speak frankly, most of them are paid… the considerable funds they raise don’t go to the Baram natives but back to their operations in Switzerland and England, with only a bit going to Baram. Do the people of Baram want to be tools of these outsiders? ”

The chief minister also cautioned the leaders that if they let other people speak for them they would eventually become powerless to stand up and defend themselves.

“Your only chance is the dam. Without the dam, you will stay like now, with only small returns from forestry, oil palm and fishing,” he said.

Taib also asked those present to look into forming their own public relations and publicity committee to work with various agencies to counter the propaganda against the construction of the dam.

Kenyah community leader Temenggong Joseph Ngau Lian said they fully supported the government and requested that the dam construction proceed as soon as possible once the studies were completed.

“All of the leaders present here support and are ready to receive this project in Baram because we are aware of the positive effects it can bring. We know there are few other projects other than pepper, rubber and timber that can change the fate of the Orang Ulu. The dam offers more advantages compared to the rest,” he said, adding that the majority of people in Baram supported the project.

Ngau regretted that a section of the Baram community was against the construction of the dam, and urged the state authorities to sincerely find a positive solution for everyone.

Kenyah community leader Lucas Kalang Laeng noted that despite the large land area in Baram, there were few opportunities for locals to make a decent living there.

“With the hydro dam and the new township, we can see there is a bit of light at the end of the tunnel for us. We hope the government will look at it and let us be a part of the development,” he said.

The courtesy call and meeting lasted for more than an hour.