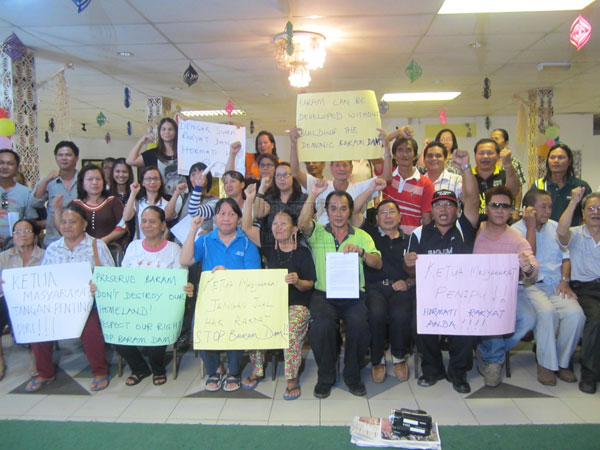 VOICING OUT: Philip (sitting 6th right) with protesters against the Baram Dam urging the government to stop the project.

MIRI: The Baram Protection Action Committee condemned the statement made by the newly-appointed Temenggong Joseph Ngau that the majority of the people in Baram support the construction of the dam.

Speaking at a press conference held at Telang Usan Hotel here yesterday Philip Jau, the chairman of the committee, claimed that Joseph made the statement without visiting all the village communities to have proper and open consultations with the people who would be affected by the dam
project.

Philip stressed that the majority of the people were against the proposed Baram HEP dam project right from the time they heard about the project.

“We have made our stand clear that we don’t want the dam project. We have also written petitions and letters to state our firm objection against the project and submitted them to the government leaders, relevant authorities and project proponents and stated the reasons for the objection. “

Over 50 Orang Ulu supporters of the committee were present at the press conference.