Wednesday, July 6
You are at:Home»News»Sarawak»Defend your rights and sanctity of Islam, Muslims told 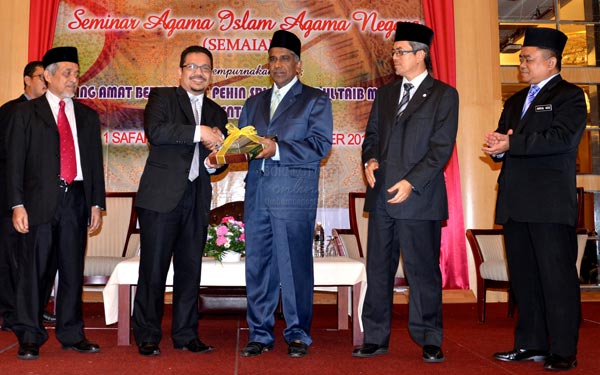 SPOTLIGHT: Zainul (second left) presenting a memento to Daud as Ismail (second right) and others look on.

MIRI: The Muslim community is deeply concerned that lately certain quarters have been denying and disputing the rights of Muslims and Islamic law in the country.

Expressing his worry, Assistant Minister in the Chief Minister’s Office (Islamic Affairs) Datuk Daud Abdul Rahman said such matters have to be viewed seriously as a threat to Islam, more so when it touches on the sanctity of the religion and questions the Syariah legislature or Islamic law which has been practised in the country, even before the colonial era.

“It is no doubt after colonialism, our country adopted pluralism in view of our multi-ethnic society.

“However, as Muslims, we have to stand up to defend our rights and the sanctity of our religion as provided clearly in the Federal Constitution of Malaysia,” he stated when closing a seminar on ‘Agama Islam Agama Negara’ at Imperial Hotel here yesterday.

Daud stressed that Islam is a religion that gives strong emphasis to harmony and peace.

Thus, he called on the Muslim community to stay united in order to reject any attempt to deny their rights as Muslims and at the same not to deny people of other religions their rights to practise their faiths.

“Freedom in practising religion as provided in the Federal Constitution does not mean that either party is free to propagate their religious beliefs as there is a limit to that since Islam is the country’s official religion and our country has been recognised as an Islamic country.

“In this respect, the non-Muslim community should respect the rights of Muslims in the country without compromise.”

Touching on the effort to strengthen the Islamic religion and the Muslim community, he hoped everyone would work closely to consolidate the existing Islamic institutions in the country.

He said the Islamic institutions must always prepare for change and widen their reach through concept, practices and quality of work.

In line with advancement of technology, he wanted the Islamic institutions to utilise their facilities wisely in order to be more organised, efficient and competitive.