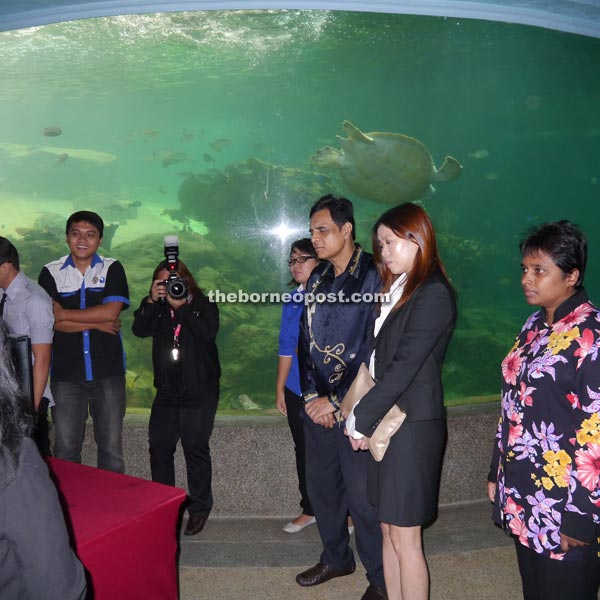 Dr Saleem (third from left) and Dr Pushpa (left) at the UMS Marine Aquarium and Museum. 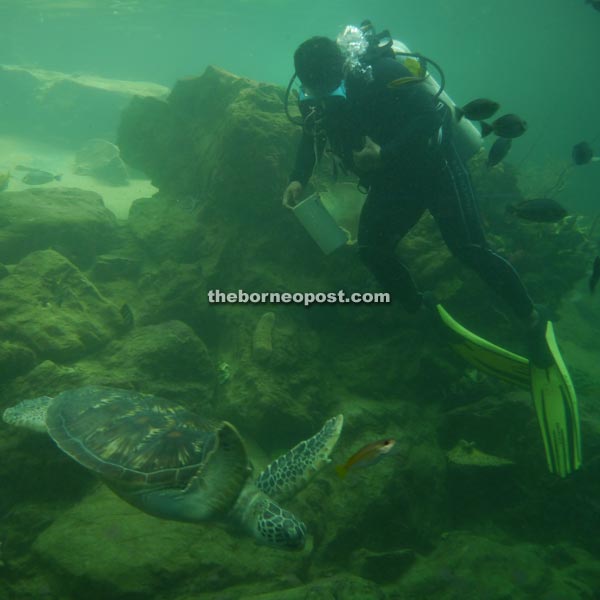 A diver tries to feed a sea turtle inside the aquarium.

KOTA KINABALU: It takes five months for a Green Turtle hatchling to grow up to a length of five inches before it reaches maturity and begins to breed.

“Depending on the situation, it varies between one to every 5,000 and one to every 10,000,” said Universiti Malaysia Sabah (UMS) Borneo Marine Research Institute (BMRI) director Professor Dr Saleem Mustafa.

Further aggravating the conservation problem of the sea turtle is their late maturity.

Due to these issues affecting the sea turtles, it is hence crucial that more efforts are necessary to educate the public, namely the fishing community, as well as the declaration of more marine areas as protected areas, stressed Dr Saleem.

It is also crucial to address and investigate the illegal trading of turtle eggs in Sandakan, he said.

“More public awareness campaigns must be held to curb the trading of turtle eggs in Sandakan because despite the rules and regulations that have been put in place, a lot of trade activities on turtle eggs were still taking place in Sandakan.

He added that the matter should be investigated further as most of the incidents were occurring and confined to Sandakan district.

The sales of turtle meat, fortunately, were not rampant.

“I think sea turtles should be allowed to mature and breed,” he stressed.

Dr Saleem also cited that it was likely that the turtle eggs that were illegally traded may have come from islands around Sandakan that are not within the Turtle Islands Park.

And for this reason, Dr Saleem lauded the declaration of more areas as protected marine areas.

“If more areas were given that status, they would be better managed,” he said.

He commended that the proposal to establish the Tun Mustafa Marine Park, which will cover over one million hectares and possibly will become the largest Southeast Asia marine park.

“The one million hectares will really make a difference. There is an abundance of seagrasses at the area (sea turtles consume seagrasses) and sea turtles are also nesting within the zone,” he said.

Dr Saleem stressed that contrary to the beliefs of some, gazetting more areas as protected zones would be beneficial to the society in general.

“When we discuss about the marine park, they think we are putting restrictions but these restrictions are not meant to deprive the people of their livelihood but rather geared towards the sustainable management of marine resources,” he described.

He mentioned further that the effort will include the introduction of sustainable fishing methods that would allow the marine life to regenerate its population.

The key idea is to allow the marine life, including sea turtles, to mature and breed at least once before they were caught, he said.

As for now, there is no clear estimation on the current population of sea turtles in Sabah.

“We don’t know. But certainly there have been more sightings of the (sea) turtles since the conservation measure has been put in place. Also it is difficult (to estimate their population) but the sightings have improved and I think the population will increase as more areas are deemed protected marine areas,” he said.

BMRI senior lecturer, Dr Pushpa M. Palaniappan interjected that they have begun tagging sea turtles in Sipadan and in Mabul since 2010.

“No one expected that such a small area would have that many sea turtles,” she exclaimed.

The project was geared towards checking the growth rate of the sea turtles and to study their food preferences. The tags, costing RM12 each, were provided by the Sabah Parks.

“We have held eight field trips so far, and we have caught one sea turtle repeatedly for five times. It hasn’t showed any signs of fear towards our divers as we have adopted the JS method of catching the sea turtles,” she said.

Dr Pushpa explained that the JS method was an award winning device that has been developed by two individuals from Borneo Divers Sdn Bhd and Sabah Parks.

With the new method, they were able to catch and lift the sea turtles onto the waiting boat above for examination and tagging without overly stressing them.

“Manually, the procedure would have been very stressful for the sea turtles and very dangerous for our divers. But with the adoption of this new method, we were able to catch and examine 50 sea turtles in a day. Prior to that, we were catching between three and four sea turtles a day, and it took a lot of effort,” she said describing the procedure.

Most of the sea turtles captured and later released were probably residents within the area.

The project was the collaboration of UMS, Sabah Parks, WWF-Malaysia and Borneo Divers.