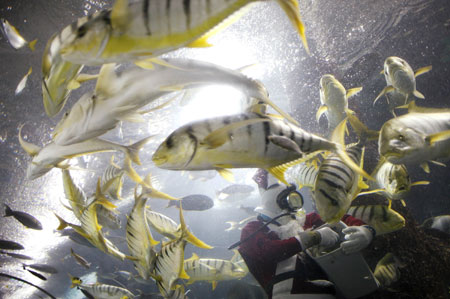 How do fish sleep? — AFP photo

FIRST and foremost, let me wish every one a Happy New Year!

This spirit of optimism is necessary for the Malaysian psyche as we brace for tough economic times during the next few years as predicted by economists.

During this period, be it noted, various measures will be introduced by the government in order to reduce the fiscal debt of the nation through the rationalisation of subsidies as well as through the raising of taxes such as the GST to sustain the economy.

Like a patient about to undergo a procedure, which is necessary for him to regain his health, we will have to go through a period of anxiety, even an uncertain future. But all will be all right at the end of the day; we shall overcome.

Be an optimist like me. Avoid the TV screen for a while and do something out of the ordinary: watch the goldfish in a tank.

I visited the Kiwi farmers on Christmas Day. Before dinner, my grandson Joshua (9+) insisted that I see his aquarium for which he would be responsible for the regular feeding of fish and recycling of water, etc.

Watching fish in an aquarium can be educational. As I was admiring the different colours and sizes and behaviour of the fish, I was asking myself why nobody had ever given me a fish when I was a boy. Well, I knew perfectly well how to catch the Betok (Anabas sp) from the stream near our house. Betok of one colour scheme (grey) was the only fish that the boys in my village caught for their kind of aquarium – a pail or can filled with rainwater. Any other type of fish was destined for the pot.

I did not know that Arawana is a fish of fortune. I saw one in a big tank in Songkhla in Thailand. The owner had bought it for US$10,000 as an investment. Soon after the purchase, so we were told, his business prospered by leaps and bounds.

My dad once caught a kind of Arawana in his fishing-net (Selambau). It was a silvery variety, not the golden type that I saw in Thailand. Had I known about its power to bring good luck, I would have kept it. I cooked it for my lunch. That must have been the most expensive fish I had ever eaten in my life, only I didn’t know it at the time.

Joshie’s fish are of different varieties – smaller than the Awarana – with colours ranging from gold, green, black and spotted. The smaller types tend to go together – safety in numbers, I suppose. They are the bottom feeders who get only the food leftovers after the big ones have had their dinner. Not fair.

The bigger ones go in pairs and are on their own – enjoying the swim and playing happily amongst the aquatic plants.

Joshie could not tell me the names of the fish; nor could I, but on New Year’s day we caught up with an expert: Uncle Daniel. While the rest of the visitors to his house were enjoying their drinks and tit-bits, Joshie and I were given a quick lecture on how to look after gold fish.

Fish need a big tank; never rear fish in a bowl because they must have corners. They would go ‘mad’ if reared in a bowl. Like humans, fish need food, plants and oxygen to live. They need a lot of water in which to survive. In a big tank, some fish can live as long as 10 to 15 years; in a small tank, however, they may die prematurely.

But what are their names? I insisted on knowing.

On his fingertips, Daniel counted the well-known varieties. For instance, the Guppy. Did you know that each Guppy must have three female companions for the production of his children? Wow! These Guppies are of the European origin. Not to be outdone, the Iphonus maculatus found in South America must have four to six spouses. Well, talk about polygamy!

The Beta splendens are fighting fish. Whenever two meet they fight! Over their women, no doubt.

Wait! A species, Beta Imbilis, is found in Sarawak.

“We also have political fish around here, fighting for positions and power,” I commented, quite pleased that on this one topic I know more than Daniel does.

Daniel also told us that in Europe the fish called Koi (a species of Japanese carp) can cost up to 10,000 Swiss Francs! Equivalent to RM36,000. He was working for a company earning millions of Francs by selling goldfish of various species in Europe.

For me watching fish in a tank and learning about rearing them is a good diversion from the TV screen which is full of depressing news from around the world – of incessant strife and killings. I don’t mind a fish fight, as long as it’s not a fist fight.        Unfortunately for them, the fish in the aquarium have limited freedom – so dependent on others for survival. I would not be happy to live under such conditions. They don’t seem to have time to rest; they keep on swimming and one cannot tell whether or not they get tired at all.

More to learn about fish

How do fish acquire different colours?

Do fish sleep at all and if so how?

Previous ArticleVillage heads told to advise those eligible for BR1M to register
Next Article Checkmate? No, there is another move