Friday, December 3
You are at:Home»News»Nation»Detention makes a better person of ISA detainees 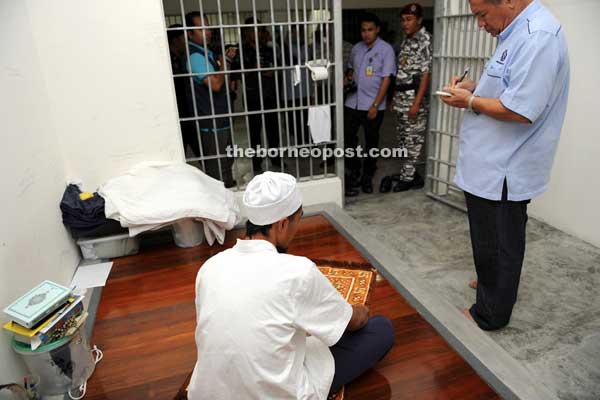 Members of the media along with KDN officers and Muzium Melaka staff visiting ISA detainees at the Kamunting Detention Centre. — Bernama photo

TAIPING: Two of the freed last six detainees of the now revoked Internal Security Act (ISA) said their two-year detention had enabled them to better appreciate life and freedom that they had taken for granted.

The three Malaysians, two Indonesian nationals and a Filipino national, were detained on Nov 14, 2011, for being members of the Sabah Darul Islamiah (DI), an alleged terrorist group.

They were released from detention yesterday.

Two of the six detainees told Bernama the period of detention had provided them with valuable experience and knowledge as well as the determination to lead a better life upon gaining freedom.

One of the Malaysians, a 38-year-old referred to as “Cikgu”, said the detention gave him  the time to realise who his  genuine friends and relatives were.

“I learned to fully utilise the time we have because we do not know how long we will live in this world. Today is reality,” he said in an interview at the Kamunting Detention Centre here Saturday night.

Most importantly, he said, the detention period gave him an opportunity to learn more about Islam.

Cikgu, who was in Cell 1 of Block B at the centre, said he was treated well and refuted claims  by certain quarters that  detainees had been subjected to abuse.

“The staff here did their job well in taking care of us. If there are claims of abuse here, they are mere lies. I also told my wife so,” he said.

Cikgu, who used to serve as a cook at the centre, also said that there was no restriction for them to meet or telephone their family members.

On his plans, Cikgu said he would resume the multi-level marketing business he had to give up upon his detention in 2011.

The Filipino detainee, a 28-year-old man referred to as “Ustaz”, said the detention period gave him the opportunity to study Islam as well as learn English and Arabic.

He said he was able to recite the Quran 15 times and memorise 12 of the chapters.

“I am grateful that the staff  here, including the teachers, treated us well, allowing us to meet family members.

“The library also has ample books on religion,” said Ustaz, who has a son.

Ustaz, who demonstrated his skill at reading the Quran to visitors last night, said he hoped to be able to serve the Malaysian government as an Islamic religious teacher, and also to teach Arabic.

“I also want to be a permanent resident here.

“I like Malaysia and I want my children to live here, to be citizens of this country,” he said. — Bernama