Wednesday, October 20
You are at:Home»News»Sarawak»MBKS: 98 pct of foodstalls graded A, B 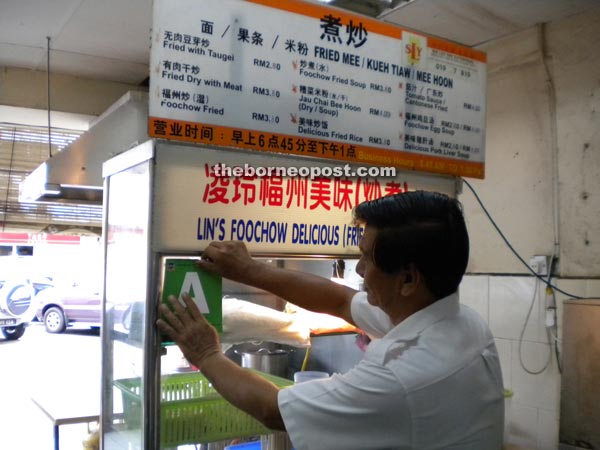 A health inspector of MBKS putting up the grading sticker.— Photo courtesy of MBKS 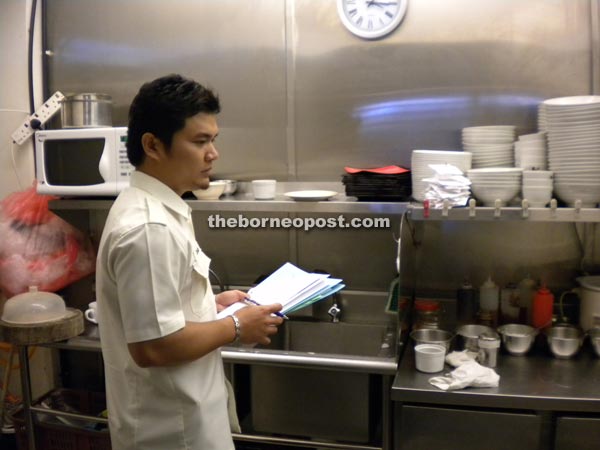 An MBKS health inspector carries out routine inspection in the food preparation area of an eatery. — Photo courtesy of MBKS Of the 459 food premises inspected last year, 112 or 24 per cent were given this Grade A sticker.

KUCHING: Food premises in Kuching South City Council (MBKS) have diligently upheld cleanliness since the implementation of the grading system in 2009.

Of the 459 food premises inspected last year, 112 or 24 per cent of them were rated A while the remaining ones got B.

MBKS is the only local authority in the country to carry out food stall grading.

Some 98 per cent were graded as above average.

On top of that, the council upgraded six Grade C food premises last year through joint inspection with the Food Safety and Quality Control Unit of Kuching divisional health office.

A spokesperson for the public health and licensing division of MBKS, who requested anonymity, said the council had noted the overall improvement in cleanliness of food premises over the years.

She said food premises of Grade A would be inspected once every year while those rated B had to be monitored twice a year.

“Generally, cleanliness of food premises in MBKS is improving. While operators meet the standard set, MBKS is keeping up its efforts to make sure all premises are hygienic,” she said when met at her office at MBKS here yesterday.

She believed there remained much room for improvement as long as operators cooperated with the council and the community at large play a role to keep the environment clean.

Food premise operators are required to display the grading sticker, failing which, they may face a minimum compound of RM50 for contravening the licensing requirements.

The rationale for visibility of a grading sticker is to encourage people to patronise food premises that uphold good hygiene.

However, it has been observed that not all operators display the sticker.

The Borneo Post approached an operator in Stutong Parade here who said MBKS awarded him the Grade A sticker, but he did not put it up.

“MBKS people came here once a year and when they did, I showed them the sticker. I don’t display it because there are so many others who do the same.”

In the event of a complaint being referred, MBKS will inspect the location immediately.

“Notice to upgrade or order of work will be issued where required. A follow-up on the food premises will also be carried out.”

An officer of MPP public health division, who declined to be named, said the council inspected these premises based on a schedule given by the Ministry of Local Government and Community Development.

“For those graded A, we carry out inspection twice a year. As for B-rated food premises, inspection is done two to three times a year while those having a C are inspected three to four times.

“At times, we hold joint operations or inspections with the Health Department. Almost all are surprise inspections.”

Since the implementation of the grading system, MPP has not rated any food premises with a D, which is regarded as “very bad”.

Operators given D grade can expect a closure order.

Under certain circumstances, they will be directed to clean up within 14 days.

Failing which, operators will face closure.

Complaints were not entirely about cleanliness of the outlet.

“There were cases where people complained about stomach discomfort after visiting a food outlet, but this is rather hard for us to determine because they could have patronised other eateries as well.”

He added the council would schedule an inspection — apart from the routine inspection — if it received a complaint.

To a question, he said MPP had only two officers for inspection of food premises in its jurisdiction.

He also conceded that the council was understaffed given that the two officers had duties other than monitoring cleanliness of food outlets.