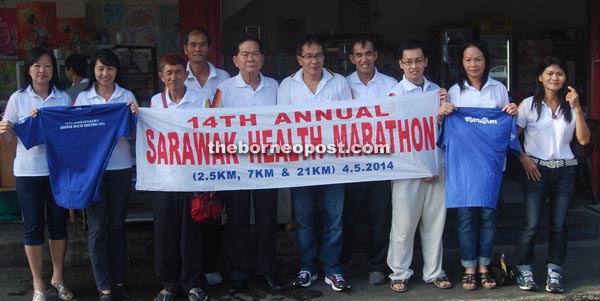 Tang (fourth left) and others display the poster and free T-shirts to be given away to the first 600 participants registered.

SIBU: Registration for the 14th edition of the Jubilee Park Sarawak Health Marathon 2014 on May 5 at Sibu Jubilee Park is now open.

Kelab Sukan Marathon Extreme (KSME) chairman Tang Ka Seng said more than RM40,000 worth of prize money would be up for grabs.

With him were KSME advisor Tiong Kai Yio and deputy chairman Joseph Tang.

With the increased prize money, Tang is expecting some 2,000 runners, who include seasoned runners from West Malaysia.

“This is a jolly good event for the runners to take part in. It is not only about the prize money but the runners can treat the run as a form of healthy exercise,” he said.

Tang said the first 800 runners who sent in their entries would each receive a free T-shirt.

The run is divided into six categories – 21km Men’s and Ladies’ Open and Men’s Veteran (48-year-old and above), 7km Men’s Fun Run and Boys’ Junior and 2.5km Girls’ Junior.

There is a separate category for the 2.5 km Ladies Fun Run and anyone interested to join the run for fun can join this category.

In the Ladies’ Open and Men’s Veteran, only the 31st to 35th finishers will each get RM50.

Entry fees are RM20 for Men’s & Ladies’ Open and Men’s Veteran and Fun Run and RM10 for the Boys’ and Girls’ Junior.

The closing date is April 30.

After Feb 28, the venue for entry forms collection and submission will be moved to the grandstand of Sibu Town Square from 4pm to 6pm. For those in Sibu, those interested to know more about the run can contact Tang at 019-8181129 or Joseph Tang at 019-8178232.

The run is jointly organised by KSME and Sibu Municipal Council, assisted by the Police and Sibu Red Crescent.

The events main sponsors are TA Ann Holdings Bhd and Dato Wong Kuok Hea while the official drink is sponsored by Milo and V-Soy.