Tuesday, October 19
You are at:Home»World»Year of Horse gallops in amid fireworks, festivities 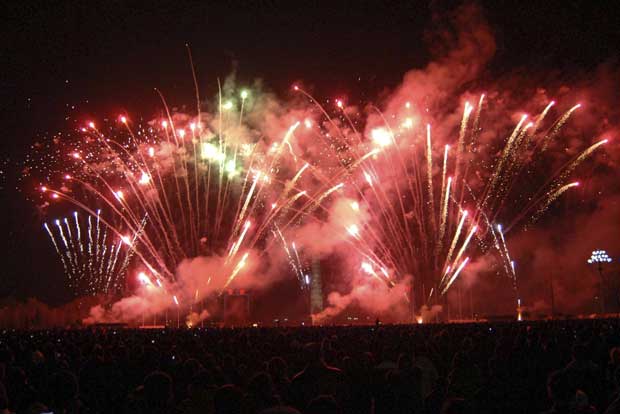 BEIJING: Fireworks illuminated the skies across Asia and millions of families gathered together Friday to usher in the Year of the Horse, kicking off a week of celebrations that included a performance by Braveheart actress Sophie Marceau on China’s annual televised gala.

Residents from China’s small towns and villages to its sprawling megacities rang in the Lunar New Year, the country’s most important holiday, by indulging in feasts of dumplings and rice cakes and exchanging hongbao, red envelopes stuffed with “lucky money”.

Many of them were among the hundreds of millions of people, including 245 million migrant workers, who had crammed planes, trains and buses to return to their hometowns in what is the world’s largest annual human migration.

Chinese communities across Asia also came together to celebrate, marking the holiday with flowers and offerings. Hong Kong was due to hold a massive fireworks display over Victoria Harbour on Saturday, the second day of the new year.

In Sydney, which regularly hosts one of the biggest new year celebrations outside mainland China, a parade scheduled for Sunday night featuring 2,700 performers and 32 floats was expected to draw more than 100,000 people.

Citizens in North Korea welcomed the new year with “beautiful dreams, great ambitions, confidence of future and optimism” according to the state-run Korean Central News Agency, adding “cheerful laughter is heard from every family”.

The lunar calendar is based on the cycles of the moon and through Chinese folklore ascribes 12 animals, one for each year in the rotating cycle. The horse is in the seventh position.

In China, the horse is traditionally associated with loyalty and energy, and is considered the second-most popular animal sign of the zodiac, after the dragon.

The phrase for “at once” in Chinese literally means “on horseback”, and some popular New Year cards this year have featured money, houses or cars on horseback, expressing the sender’s wish of speedy good fortune for the receiver.

This year, however, is set to be a dramatic one, according to Hong Kong feng-shui masters, as it is the Year of the Wood Horse — incorporating the element of fire.

“I wish good health, happiness for you and your families and may all go well with you,” he said, according to the official Xinhua news agency.

On Thursday, Beijing was a cacophany of light and sound as residents took to the streets to light firecrackers — traditionally believed to scare away evil spirits — into the wee hours of Friday.

But by morning the capital was mostly quiet, as most of the migrant workers who comprise more than a third of its 20 million population had left the city to celebrate the new year in their ancestral homes.

Beijing saw a slump in fireworks sales this year amid pollution concerns among residents and a move by city officials to cut the number of licensed firework retailers by 12 percent, the state-run China Daily reported.

Levels of the small particulate pollution known as PM2.5 ranged from 140 to 160 micrograms per cubic metre from 6 pm to midnight Thursday — a figure that was still well above the World Health Organisation’s recommended level of 25 micrograms, but “much better” than the all-time peak of 1,000 recorded last Lunar New Year’s Eve, Beijing’s environmental watchdog said Friday.

State broadcaster CCTV aired its annual five-hour gala, a tradition dating back to 1983 and featuring comedians, dancers and singers. The hugely popular programme last year drew 750 million viewers in China alone, according to the broadcaster.

For 24 years it featured Peng Liyuan, Xi’s wife, who is a soprano singer with the rank of army general. She retired from the show shortly after her husband joined China’s Politburo in 2007.

But Chinese rocker Cui Jian, who inspired the 1989 Tiananmen Square pro-democracy movement and was in talks to perform on the show, did not feature. The Beijing News daily quoted his manager as saying he had refused to “change the words” of his songs.

In additional to giving traditional hongbao, or red envelopes, some Chinese this year have taken to sending Lunar New Year money by smartphone.

The popular mobile chat app WeChat, which has more than 600 million subscribers, this week introduced a new feature allowing users to send an electronic new year “envelope” of up to 200 yuan (US$33), the China Daily reported. — AFP