Sunday, May 22
You are at:Home»News»Sarawak»Heritage area shop owners asked to repaint buildings 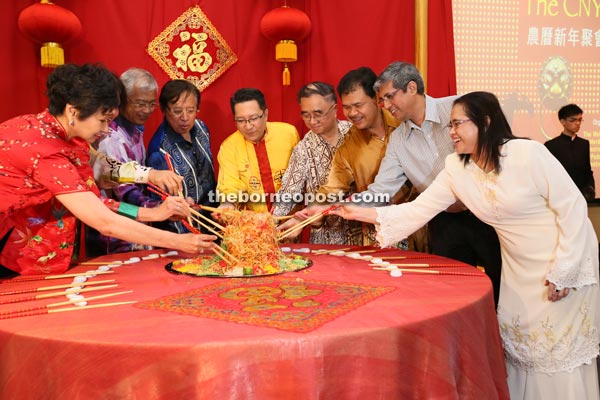 KUCHING: Shop owners in heritage areas have been asked to collaborate with the Kuching North City Commission (DBKU) to paint their respective buildings to portray a new image to both locals and tourists.

Tourism Minister Datuk Amar Abang Johari Tun Openg said the council has been directed to improve the outward appearance of heritage areas while Main Bazaar would also be decorated with lights.

“Once Main Bazaar is decorated with lights, it will be like Orchard Road in Singapore. DBKU has been given the money to do it. While maintaining the heritage in the city, we do not want our shops to look gloomy.

“So I have requested DBKU to work with shop owners to paint their buildings. The expenses will be divided 50-50 among shop owners and DBKU. Where can you find such a deal?” he said during a Lunar New Year gathering on Thursday.

Abang Johari, who was representing Chief Minister Pehin Sri Abdul Taib Mahmud at the function, said even if some quarters might be sceptical, upgrading the areas would mean more business for shop owners.

Although the government would help generate more business for the local community, he said, not all efforts had gone smoothly.

Citing the Visit Malaysia Year 2014 lighting installed in Petra Jaya, he said with regret that they had gone missing.

“The Visit Malaysia Year lights are so beautiful and yet they got stolen. When we do it, we mean to do it for you, and not for the government.”

Hence, Abang Johari called on the community to appreciate the revitalisation of the city’s heritage areas, which is being implemented at a cost of RM17 million.

The key component — the Golden Bridge — is now under construction and would link the Kuching Waterfront to Petra Jaya, reaching both the new and old State Legislative Assembly (DUN) buildings.

Abang Johari said the Kuching Waterfront facilities would also be upgraded and together with the Esplanade would be linked to Kampung Masjid and Kampung Bintangor.

“In terms of funding, we have already received blessings from both the federal government and state government,” he said, adding the whole area would be completely transformed.