Friday, May 20
You are at:Home»News»Sarawak»Secondary school teacher killed when his car rams tree 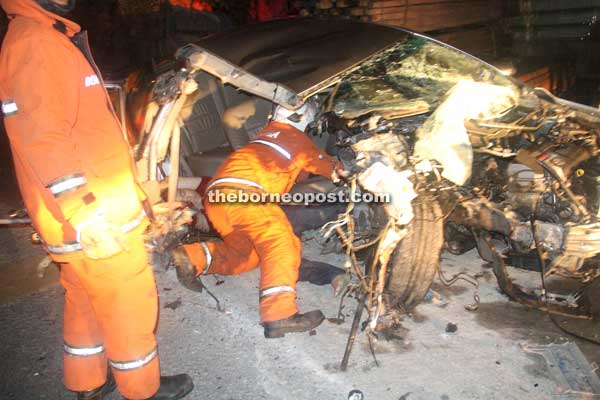 Bomba personnel extricating the body from the wrecked car.

The victim was identified as Jimmy Then Choon Jing, 35, from Serian who was a teacher of SMK St Joseph.

According to a source, the car driven by the victim was heading towards Serian from here when it went out of control and rammed a roadside tree.

Meanwhile around 3am, a man went to a chicken-processing factory not far from the scene of the accident. He said he did not hear or see anything until workers told him there was an accident around 5am.

He rushed to the scene and saw a badly damaged car by the roadside and the victim lying motionless in the car.

He called Bomba which despatched personnel to the scene to extricate from the wreck the body of the victim who had died on-the-spot.

An ambulance brought the body to the hospital for a post-mortem.