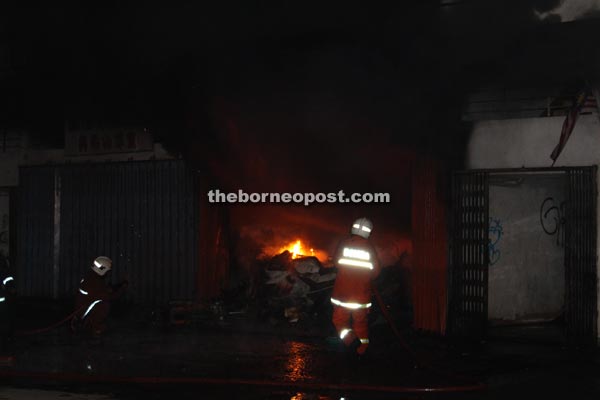 Firemen dousing the fire which razed the shop at Dam Road.

LAHAD DATU: A motorcycle shop at Dam Road went up in smoke on Thursday after a fire broke out at the outlet in the evening.

Clouds of black smoke billowing high into the sky could be seen about one kilometer away after the fire broke out at about 6.30pm.

District Fire and Rescue department chief, Mohd Apandi Mahmood said his department received an alert at 6.40pm and rushed to the scene with two three engines and six firefighters.

“We arrived four minutes later and took about fifty-five minutes to control the blaze from spreading to other premises.

“The fire managed to be completely extinguished at 9.55pm. However, the motorcycles and spare parts in the shop were destroyed in the incident,” he said when contacted yesterday.

Apandi added that no casualties were reported while the cause of fire and losses incurred were still under investigation.