Wednesday, October 27
You are at:Home»News»Sarawak»Taib sworn in as Sarawak’s seventh Yang di-Pertua Negeri 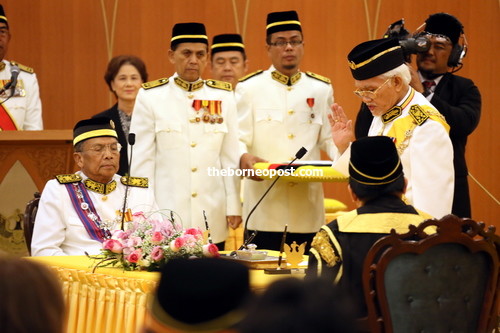 KUCHING: Tan Sri Abdul Taib Mahmud, who stepped down as Chief Minister of Sarawak after almost 33 years in office yesterday, was sworn in as the new Yang di-Pertua Negeri of Sarawak today, marking another historical milestone for the state.

The ceremony began at 11.00am with Tan Sri Adenan Satem, who succeeded him as the new Chief Minister, reading the instrument of appointment, which was presented to Taib by Yang Dipertuan Agong Tuanku Abdul Halim Mu’adzam Shah at Istana Negara in Kuala Lumpur yesterday.

After signing the instrument of appointment, Taib took his oath of office before Chief Judge of Sabah and Sarawak Tan Sri Richard Malanjum at the StateLegislative Assembly building here in the presence of Adenan.

Taib was the fourth chief minister of Sarawak, having assumed the office on March 26, 1981, by succeeding his uncle Tun Abdul Rahman Ya’kub.

Taib worked as a judge’s associate in the Supreme Court of South Australia after having completed his law studies at the University of Adelaide, before returning to Sarawak.

He entered the world of politics in 1963 when he joined the Sarawak Legislative Council and served until 1966.

He was appointed Sarawak Minister for Communication and Works in 1963 and served in that capacity until 1966 when he was appointed as the Minister of Development and Forestry.

His career at the federal level began when he won the Samarahan Parliamentary seat in 1970 and was subsequently appointed as the deputy minister of Works, Post and Communication (1970), Primary Industries Minister (1972), Defence Minister (1978), Acting Foreign Minister (1979) and Federal Territories Minister (1980).

On March 9, 1981, Taib resigned from his post as Federal Territories Minister to contest in the Sebandi state by-election.

He won the Sebandi seat unopposed and was later appointed as Sarawak Land and Mines Minister.

Subsequently he was appointed as Sarawak Chief Minister on March 26, 1981. –BERNAMA