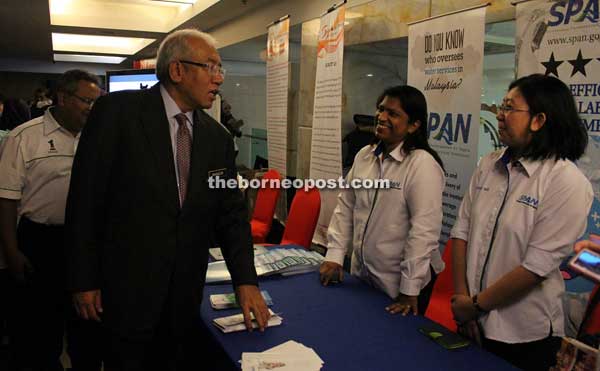 Mahdzir at the opening of the seminar yesterday.

KOTA KINABALU: A total of RM1.8 billion in soft loans are still available for entrepreneurs, hence the Ministry of Energy, Green Technology and Water wants more co-operation between financial institutions and the ministry in giving out loans to entrepreneurs involved in the green energy sector.

Its deputy minister, Dato’ Seri Mahdzir Khalid said that financial institutions played an important role in encouraging the development of green technology in the country by providing soft loans to the industry players.

Mahdzir revealed that the government had set aside RM3.5 billion in 2010 as soft loan allocation for green energy entrepreneurs and to date, only RM1.7 billion had been utilized.

“I hope that there will be more entrepreneurs from Sabah who will grab this opportunity to invest in green energy sector as RM1.8 billion of soft loan is still available,” he said, adding that there were already a few of the industry players from Sabah who had received soft loans for biomass development.

Mahdzir said this during a press conference after the opening of Sabah Towards Green Growth Seminar at Promenade Hotel here, yesterday.

The seminar conducted by the ministry was attended by 150 participants and 100 of them are officers from public and rivate sectors, 40 students from local university and ten PUSPANITA members.

With the objective of spreading information on Malaysia’s green technology policies, the seminar also aims to identify and understand issues and challenges faced by the green technology sector.

Mahdzir also said that Sabah’s progress in green technology development was satisfactory by giving an example that a program to overcome climate change worth RM16 million was recently signed between the Sabah Forestry Department and the European Union.

He also announced the setting up of Sustainable Energy Development Authority (SEDA) Kota Kinabalu branch in the near future to encourage the green energy development in the State.

“Green technology sector is the main sector that could contribute towards the reduction of carbon emission as well as a catalyst for green economy development.

“According to a report by the United Nation Environment Program (UNEP) and International Labour Organization (ILO), the total world market for the environment friendly products and services are estimated to be RM4.4 trillion (USD 1.37 trillion)” he added.

Mahdzir also said in an effort to encourage usage of renewal energy to generate electricity, the government had also enhanced the Feed-in-Tariff (FiT) by expanding it in the State starting January 1, this year.

According to him, as of December 31, last year, out of the total 149.78 MW renewable energy generated by Peninsular Malaysia and Sabah, the state had contributed 36.5 MW or 24.37% to the total output, and were all connected to the grid.

“This is a big contribution towards the country’s effort to reduce dependency of fossil based energy source,” he said.

He also urged for all relevant parties to multiply their efforts towards the implementation of green initiative of Malaysia so that the target to reduce carbon intensity by 40% is achieved by the 2020.

A green energy carnival will also be held in conjunction with the seminar that will be officiated by the Deputy Prime Minister Tan Sri Muhyiddin Yassin at the Likas Sports Complex, here.