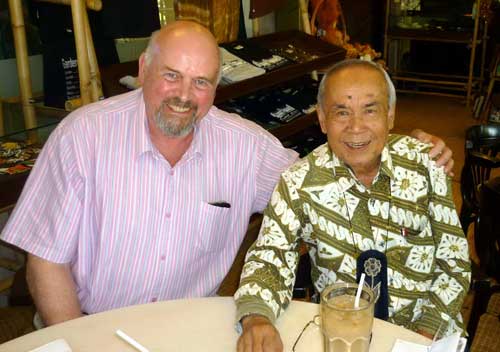 Shane and Uncle Di meet up.

THE meeting at the Museum Cafe was not exactly as tearful as when two brothers from North and South Korea met last week after many years of separation. But it was emotional nonetheless – full of childhood memories.

It was many years ago, 65 years to be exact, that Shane Bruen and I played together in Lundu. I was from the police barracks staying with my brother, Sergeant Bunseng, the police officer in charge of the district; Shane was the eldest son of the District Officer Desmond L Bruen. He was born in Kuching in 1947. He was sent to England to study and went to Lundu during the long school holidays.

Cowboys and the Indians

The schoolboys in our gang were Kana Ujis, Serang Deli, Bueng Sahmat and me. We called the DO’s son ‘Shen’ not knowing that he should have been properly called Shon, according to the Irish pronunciation. Not that we were so much concerned about his ethnicity nor would we care anyway as long as he fitted in with our scheme of things: his blonde hair. That made him a perfect target for our after-school game – Cowboys and the Indians.

We made blowpipes out of the bamboo from the thick hedges that had been planted around the compound of the district office. The pellets were made of sun baked clay.

Inside the hedges we had cut through a path invisible from the road and big enough for us to go through one at a time. Whenever Shane came to join us he was an excellent object – his bulky body – he, the Cowboy and we, the Indians.

At the time we were greatly influenced by Hollywood movies starring Roy Rogers and Jesse James or Tarzan (Johnny Weismuller).

There was a girl, Siti, daughter of Haji Hussaini from Simanggang who had been posted to Lundu as the Native Officer. Later, Datin Siti herself became a senior state government officer.

Siti wanted very much to play with us but  she was disqualified because she was always properly dressed. Her mother insisted on this requirement. We boys only wore seluar pontong (shorts).

Kite flying was a popular afternoon activity after school. We taught Shane to fly kites and engage them in mid-air combat. We taught him how to make the kite string a lethal weapon by lacing it with fine glass from used torchlight bulbs. Rice gruel was glued to the entire length of the string and laced with glass which had been finely pounded.

The most effective was grit ground from the porcelain used as insulators on a telephone line. We got this stuff from Anai or Madan Ali, whose father was the wireless operator. He had some old insulators in his store and Anai (later an auditor with the state government) was our regular supplier of the component of the weapon.

The thrill of seeing the rival’s kite drift away helplessly was most exhilarating. We cut many kites belonging to lads from the Chung Hua school. They had not discovered the secrets of the porcelain. Among our own players we competed as fiercely as ever as to who could produce better kites and more lethal strings.

The best string was benang chap sauh (Anchor Brand). The shop that sold paper for kite-making also sold the thread. Each golong (ball) was sold for 10 sen. Our regular supplier was Shane, most probably from his mother’s knitting kit. We did not care where he got it from as long as we had a good time on a windy afternoon.

From the soft wood called Plaie tree (Alstonis spp) we made toy boats and sailed them down the mountain stream at Pengkalan Anang at Sungai Ayer, about a mile from the district office. In there we also swam until we were literally blue in the face. The water was fresh and clean then. Don’t talk about it now.

We cheated each other in marble playing and Shane was not exactly innocent.

At the meeting last week, he suddenly produced a bag of marbles by way  of apologising for cheating at marbles. Little did he know that he was shot hard several times with our blowpipes. Did he ever tell his mum or his Amah, Olive, about his injuries?

We missed him when he went back to England and the Cowboy and Indians game was scrapped altogether when he did not return.

For many years in between we did no see or hear from each other. I was away in a foreign land, he enjoying his school in England, probably talking in Sarawak Malay with his dog. He speaks the Kuching Malay that he learnt from his minder.

Since his parents returned to England soon after Malaysia was formed in 1963, Shane never came back to his birth place until two weeks ago, as a tourist, his wife Sarah accompanying him.

Instead of going to Lundu, he and Sarah went to Lubok Antu. But before we departed, I managed to extract a firm pledge from Sarah for them to come back to Sarawak as soon as possible.

I will take them to Lundu where we used to play marbles, fly kites, play ‘Red Indians’, and build toy boats, preferably pretty soon before we all lose our marbles.