Tuesday, February 7
You are at:Home»News»Sarawak»Security guard on the run after colleague found dead
For the freshest news, join The Borneo Post's Telegram Channel and The Borneo Post on Newswav. 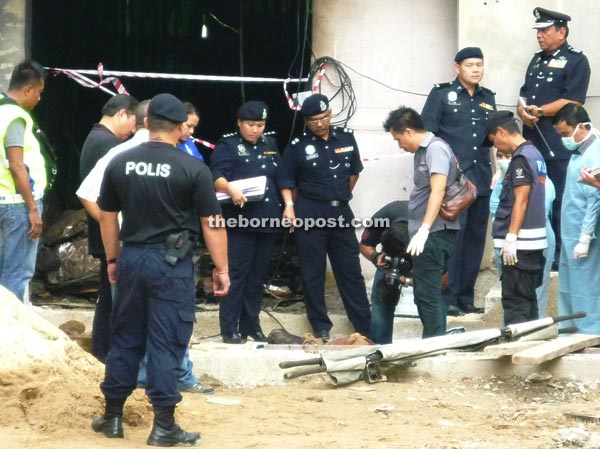 Police personnel are seen taking a closer look at the deceased after digging his body out of the hole. 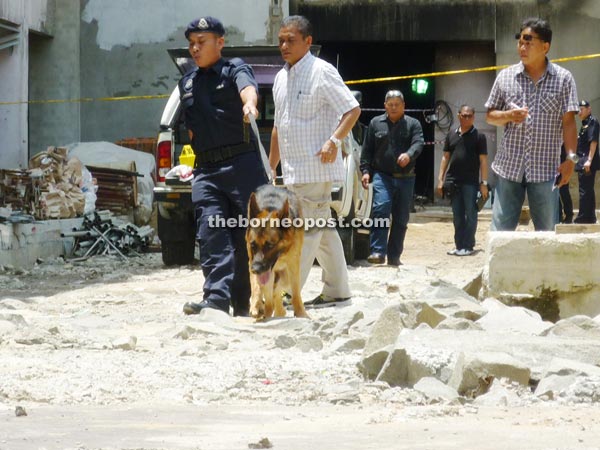 Police personnel are seen combing the crime scene for clues.

KUCHING: A security guard is on the run following the discovery of the body of a fellow guard buried at the site of the partially-completed Clinical Research Centre at Sarawak General Hospital here.

Police made the gruesome discovery yesterday after security guards, who were due to take over from the night shift personnel, arrived at 7am and saw blood splattered across the wall and ground on the first and second floor of the building.

Following a report lodged by the guards, a police team comprising CID, forensics and canine unit personnel rushed to the scene and followed the blood trail to a freshly-filled hole in the ground, which had been dug a day earlier by workers to install pipes.

Police subsequently dug up the two-foot deep hole, measuring two metres long and a metre wide, and found the body of one of the two night shift guards wrapped in a plastic sheet inside.

“We do not know yet if he died from the blow to the head prior to being buried, or whether he was still alive at the time he was buried.

“We will only be able to know that once a post mortem is conducted,” he told reporters, adding that police did not find the murder weapon at the scene.

According to Roslan, police had already notified the victim’s family and were tracking down the other security guard, a 52-year-old who is considered the prime suspect.

He revealed that the morning shift guards were initially able to contact the suspect, who denied knowing what had happened to his co-worker before switching off his mobile phone.

The guards were privately hired by the building contractor to protect the site, with two persons working 12-hour shifts from 7pm to 7am daily.

Yesterday’s discovery was the second fatality to occur at the partially-completed Clinical Research Centre wing of the Sarawak General Hospital, after a fire which broke out inside the building on Feb 15 claimed the life of a foreign construction worker.