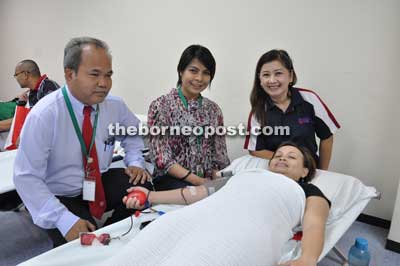 (From left) Martin, Alina and Hadiah with a donor during the blood donation drive.

KUCHING: A health awareness programme that centred on a blood donation drive was held at Normah Medical Specialist Centre in conjunction with the International Women’s Day celebration yesterday.

Jointly organised by the hospital together with Malaysian Trade Congress Union (MTUC) Sarawak women committee, more than 200 donors turned up for the annual blood drive.

A free Cardiopulmonary Resuscitation (CPR) education was also made available by the hospital staff.

“Some of the booths also gave out special vouchers for healthcare services in the hospital such as blood screening, pelvis scan and permanent hair removal,” said Normah business development manager Alina Ibrahim to thesundaypost.

She said a medical talk on the latest ‘Ultrasound and Surgical Techniques for Women’ and ‘Facial Rejuvenation’ was also held at the hospital’s auditorium.

MTUC Sarawak division women head Hadiah Leen said that in conjunction with the International Women’s Day, a free skin analysis and shoulder massage were provided for the ladies.

“Those who have donated their blood today (yesterday) will stand a chance to win a lucky draw prize which consists of a complimentary stay at the Sarawak Bank Employees’ Union (SBEU) Retreat and Training Centre,” said Hadiah who is also SBEU president.

Meanwhile, according to Normah’s laboratory service manager (pathology Department) Martin Jisun Aken, donating blood is in fact beneficial to the donors themselves.

According to him, a person is able to donate blood every three months as the bone marrow produces enough new blood cells during that period.

“By donating blood, a person would feel energised and have an overall healthier look,” said Martin, who rubbished claims that donating blood would lead to weight gain.

“Gaining weight depends on a person’s body mechanism and their way of life,” he added.

He also said that donors would be able to ascertain their health status through their donated blood as they will be informed if they are suffering from diseases such as Hepatitis C, Hepatitis B or any sexually transmitted diseases.

During the process of a blood transfusion, Martin said that it is a universal practice to give patients a specific blood match such as A to A, B to B, AB to AB.

The universal type ‘O’ he said will only be given to the patient if the supply of their specific blood is low or depleted at the blood bank.