Monday, February 6
You are at:Home»News»Sabah»Sun Bears sent to conservation centre
For the freshest news, join The Borneo Post's Telegram Channel and The Borneo Post on Newswav. 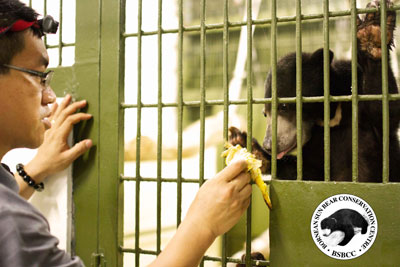 SANDAKAN: Five Malayan Sun Bears that were either confiscated or handed over to the Sabah Wildlife Department between June last year and March 1, this year have been transferred to the Bornean Sun Bear Conservation Centre (BSBCC) near here.

The Sun Bears were initially sheltered at the Lok Kawi Wildlife Park in Kota Kinabalu after they were seized by Sabah Wildlife Department rangers, with some being handed over by the public, Park officer-in-charge and veterinarian, Dr Rosa Sipangkui said.

“We tranquillized the bears in the early afternoon of March 10 and conducted a full medical examination to make sure they were healthy before they were transferred into their transport cages for their eight-hour journey to their new jungle home at the BSBCC in Sandakan.

“Four of the five bears that we sent to BSBCC are males, including a six-month-old cub. Though I feel sad to see them leave Lok Kawi, I am happy for them as they will be getting a much better jungle home and also have an opportunity to be able to live in a forested environment very much like their original habitat and may be rehabilitated and released into a protected forest reserve one day,” Rosa said in a statement yesterday.

BSBCC chief executive officer Wong Siew Te said it took his team three hours to unload the bears when they arrived, and to settle them into the bear house.

“We are monitoring their progress, and we will keep the public updated on how they are doing. With the completion of our second bear house, BSBCC is now able to receive more bears that were previously in captivity or those rescued by the Department.

“The bears that we received are not part of those for public viewing at the Lok Kawi Wildlife Park. With the expected arrival of two more bears this week, BSBCC will become home to 34 bears,” Wong said.

He stressed that it is an offence for the public to keep a protected species, and anyone who has the animal in captivity should surrender it to the department.

“My message to the public is that Sun Bears are protected by law and cannot be kept as pets. Sun Bears are forest dependent species and play important roles in the forest ecosystem as seed dispersers, forest engineers, forest doctors and forest farmers. They keep our forests healthy, for the benefit of humans and all life forms,” Wong said.

Department director Datuk Dr Laurentius Ambu said Sun Bears fall under Schedule 1 of the Totally Protected wildlife species list in the Sabah Wildlife Conservation Enactment 1997, and that killing, keeping a bear, or having in possession body parts like claws and gall bladders could result in punishment of up to five years’ jail or a maximum of RM50,000 fine.

“Habitat loss and poaching for parts used in traditional medicine are among key threats that have led to a severe decline of the Sun Bear population in the last three decades in Sabah.

“Sabah is now at a crossroad and failure to protect remaining forest reserves would be a deathblow not only for our beautiful Sun Bears but also many other protected wildlife species such as Clouded Leopards and Orang Utans that share a common habitat with the Sun Bear,” Ambu said.

In Borneo, the smallest of the world’s eight bear species is also seeing a drop in numbers following their illegal capture for the pet trade and when they are wrongly perceived as pests and gunned down.

Found throughout mainland Asia, Sumatra in Indonesia and Borneo, the exact number of Sun Bears in the wild is unknown, making it even more pressing to reduce pressure on a species that is classified as “vulnerable” on The IUCN Red List, and at risk of becoming endangered unless circumstances threatening their survival improve.