Friday, August 12
You are at:Home»News»Sarawak»Adenan promises to back up Yussibnosh 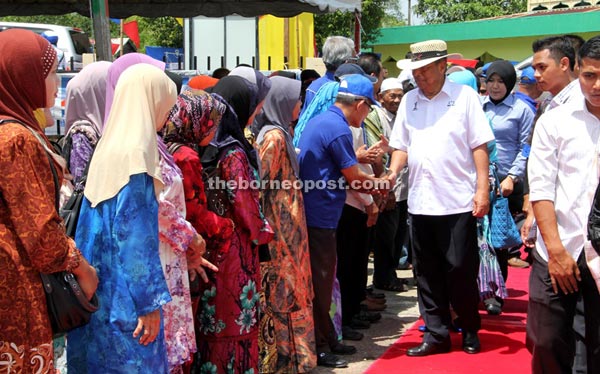 Adenan being greeted by villagers of Kpg Tellian Laut, Kpg Datuk and Kpg Penakub Permai in Mukah upon his arrival.

“I will be his backbone. When he asks for allocation, I will give because we are from the same party and he has my support. And if the opposition candidate were to ask of me even if he wins, I will give him zero. This is not being arrogant but this is reality,” said Adenan, who is also Parti Pesaka Bumiputera Bersatu (PBB) president.

He said the difference between Balo and PKR’s candidate Abdul Jalil Bujang was that Jalil, who is not supported by the government, would not be able to get any project as there was no one backing him up.

“The second difference between them is that PKR is just an ‘empty tin’ that makes loud noises but can’t deliver,” said the chief minister at a meet-the-people session at Abdul Rahman Yakub Community Hall of Kpg Tellian Laut, Mukah.

Adenan, who took over from Pehin Sri Abdul Taib Mahmud as chief minister on Feb 28, said Taib had asked him to convey a message to the people here.

“Before he retired, he told me to remind you of what he has done for the people of Balingian and to remember what he had contributed to the people of the area, as well as the whole state.

“So I have to tell you this that if you really appreciate him, he wants you all to vote for the PBB/BN candidate as it is also his party. But if you disregard his advice, it means that you will be ‘tulah’ (cursed) because he has done so much for you all,” said Adenan.

Earlier, Long Bedol, representative of PBB sub-branches of Kpg Tellian Laut, Kpg Datuk and Kpg Penakub Permai said all the 1,695 voters in the three villages would give their full support to the BN candidate.

“These three villages have been the bastion of the BN in Balingian since the 60s. Thus, we will support the BN candidate regardless of his religious background as all of us from these three villages consider ourselves as one community,” said Long.

Pledging to deliver an even higher majority for the BN candidate, he said he would make sure that not even one vote would go to the opposition.

“There is no turning back for us. We will make sure that BN wins with a handsome majority,” added Long.

He said even before the campaign started, the opposition had already long lost confidence because even state PKR chief Baru Bian said it was an uphill battle.