Tuesday, May 17
You are at:Home»Business»‘Sarawak Oil Palms an undervalued stock’ 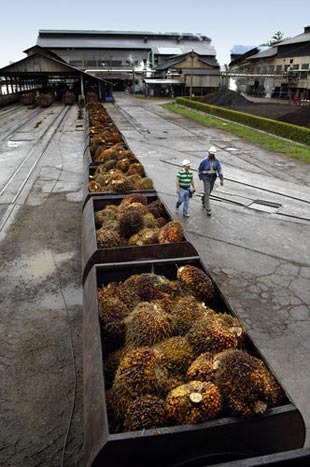 Following Wilmar’s policy, it is believed that several larger Sarawak groups are now considering building their own refineries. — Bloomberg photo

KUCHING: Sarawak Oil Palms Bhd (Sarawak Oil Palms) which is not affected by Wilmar International Limited’s (Wilmar) latest policy is believed by analysts to be an under-researched and undervalued stock.

According to the research arm of Maybank Investment Bank Bhd (Maybank IB Research), the group is not affected due to the fact it has its own refinery.

Although in the past, Sarawak Oil Palms sold 100 per cent of its CPO to Wilmar, the group had however ceased its sale of crude palm oil (CPO) to the latter since July 2012 when its own 1,500MT/dayrefinery commenced operation.

It noted that the refinery is located in Bintulu, within the vicinity of Bintulu Port, the deepest port in Sarawak.

“Sarawak Oil Palms’s refinery was running close to full capacity in 2013,and made a decent pretax profit of about RM12 million.

“Approximately 60 per cent to 70 per cent of its CPO feedstock is sourced from Sarawak Oil Palms’s own mills,” the research arm further noted.

Over the past one and a half years, Sarawak Oil Palms has successfully built its own distribution network, exporting its palm oil products to India and China with the help of trading houses.

In December 2013, Sarawak Oil Palms took the next step of setting up its trading and marketing arm in Singapore and hired four traders. Its trading division aims to help with hedging and improving the overall profitability of the group.

“As for Sarawak Oil Palms, its plan to double its refining capacity within the next five years may now be expedited as more Sarawak planters are now knocking on its door hoping to build a relationship with Sarawak Oil Palms,” Maybank IB Research observed.

However, it pointed out that the decision to double its refining capacity has to be weighed against the present poor refining margin experienced by refiners,in part due to the overcapacity in Indonesia and Malaysia.

Regarding the fresh fruit bunches (FFB) output growth in 2014, the research arm noted that Sarawak Oil Palms is guiding for 11.5 per cent year on year (y-o-y) growth in FFB output for 2014 or 1.07 million metric tonne (MT) of FFB in absolute terms.

“This is, however, slightly lower than our 1.09 million MT of FFB output forecast (or 13.5 per cent y-o-y growth). We are keeping our growth forecasts for now as we believe Sarawak Oil Palms is being conservative in its guidance.

“Nonetheless, we may be forced to lower our projection if the current dry weather continues or El Nino develops in the second half of 2014 (2H14),” it projected.

“We estimate Sarawak Oil Palms’ overall FFB yield will improve slightly to 18t/ha in 2014,” it opined.

Maybank IB Research further estimated that Sarawak Oil Palms’ all-in cost of production was at approximately RM1,700 per tonne in 2013, 14 per cent y-o-y due to its lower FFB yield (on new areas coming to maturity and biological tree stress), and lower PK credit achieved.

“In 2014, Sarawak Oil Palms expects its cost of production to be flat or lower mainly on lower fertiliser costs which will offsetrising labour and other costslike transportation,” it added.

According to the research arm, Sarawak Oil Palms had revealed spending approximately RM60 million to build a 300MT per day (or 100,000 MT per annum) biodiesel plant at its integrated downstream complex in Bintulu, Sarawak. The plant is expected to be up and running by July this year.

“Sarawak Oil Palms is rushing to complete its biodiesel plant construction in time to meet the government’s B5 programme to be rolled out in East Malaysia inJuly 2014.

“We understand there will be four blending depots in Sarawak, located at Sibu, Kuching, Miri and Bintulu. It is estimated that Sarawak’s B5 programme will require about 60,000 MT of palm biodiesel a year,” it noted.

It further noted that Sarawak Oil Palms’s biodiesel plant has the potential to meet all of Sarawak’s biodiesel requirements with about 40 per cent spare capacity to cater for the export market.

“While Sarawak Oil Palms is tight lipped on the government’s subsidy programme, we understand from industry sourcesthat the government will purchase palm biodiesel based on a RBD palm oil plus RM515 per tonne formula.

“Assuming RM300 per tonne, is to cover processing cost, there is a healthy gross margin of RM215 per tonne for Sarawak Oil Palms,” it observed.

Aside from focusing on its plantation and biodiesel segments, Sarawak Oil Palms also plans to launch two Miri property projects sometime in 2014.

The research arm noted that the longer term game plan for Sarawak Oil Palms is to build up its property expertise to unlock the value of its 5,000-ha Taniku estates which is closer to Miri city.

Although the nearest development at the Taniku estates is only 300 meters away, Maybank IB Research said the estates are currently at their prime, giving FFB yields of approximately 28 per tonne per ha in 2013.

“We understand Sarawak Oil Palms will probably carve out 1,000 ha-2,000 ha of the Taniku estates initially and commence master planning for potential property development in three to five years’ time.

“We have yet to factor contributions from these property projects into our earnings forecastsfor now, pending actual launch and further details,” it said.

Overall, Sarawak Oil Palms guides that it has budgeted a capex of approximately RM250 million for 2014. This includes the about RM60 million capital expenditure (capex) required to build a biodiesel plant.

“We have adjusted our capex forecast to incorporate the new guidance,” the research arm said.