Saturday, August 20
You are at:Home»News»Sabah»Litterbugs will be fined on the spot – City Hall 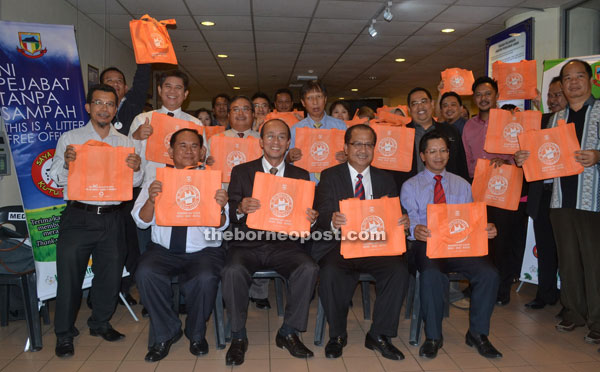 KOTA KINABALU: Litterbugs be warned as City Hall will now compound them on the spot to raise public awareness that littering is an offence.

Mayor Datuk Abidin Madingkir has announced that this is the Year of Enforcement for City Hall, in support of Visit Malaysia Year and Visit Sabah Year 2014.

He said City Hall would compound litterbugs on the spot to teach them a lesson.

It was learnt that the on-the-spot compound for littering is RM20 and litterbugs can be fined up to RM500.

In addition, Abidin said City Hall and the Health Department would also crack down on dirty premises and restaurants by prohibiting them from operating.

The department has also joined the campaign to reduce the usage of plastic bags spearheaded by City Hall.

“So far 20 offices have been recognized as litter-free, including Sabah Fisheries Department since the campaign was launched in 2008,” said Abidin.

He said the main objective of the Anti-Litterbugs Campaign was to make Kota Kinabalu city litter-free.

On the campaign to reduce plastic bag usage, Abidin reiterated that City Hall was not out to ban the usage of plastic bags.

“The message that we stress on is to dispose of plastic bags properly and to practise the 3R concept – reduce, reuse and recycle,” he said.

Since the campaign to reduce plastic bag usage was launched on June 7, 2010, a total of 309 participants have signed up for the cause, including Sabah Fisheries Department.

Abidin hoped that the department would continue to play its role in instilling good values and love for the environment among its employees.

“Areas that are polluted with rubbish are not only an eyesore, they also cause negative impact to the community as well as lead to various diseases due to dirty environments.

“In addition, dirty environments also tarnish the image of our city in the eyes of tourists, not to mention that this year is Visit Malaysia Year and Visit Sabah Year,” he said.