Saturday, August 13
You are at:Home»Features»El Nino havoc possible this year 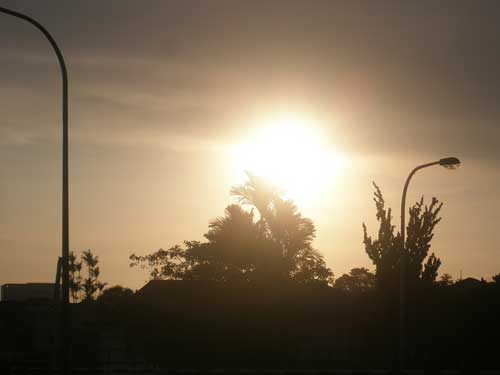 Solar heat gets more intense under the influence of EL Nino.

When an El Nino event is predicted, environment controllers and policy-makers in the region should impose a total ban on large-scale land clearing or open burning, not just in Malaysia (or Sarawak) but also in the other countries of Southeast Asia.

RECORD-BREAKING heat, brought on by El Nino, could wreak havoc on weather patterns this year.

Based on an early warning report, published in Proceedings of the National Academy of Sciences (PNAS), there is a 75 per cent chance of such an event occurring in 2014.

The strongest effects on precipitation are in Southeast Asia and the western Pacific Ocean, especially in the dry season (August to November).

The highest global temperatures were reportedly recorded during the last strong El Nino in 1998.

Given the continued increases in baseline temperature around the world, an El Nino event this year could lead to record-breaking heat.

According to the PNAS report, this could send temperatures soaring worldwide, causing droughts in Australia and Southeast Asia, heavy rain and flooding in parts of the US and South America.

This time around — if it happens — Sarawak and Malaysia, as a whole, will not be spared.

If it occurred towards the end of the year, the increased temperatures and drought conditions could persist through 2015.

However, the World Meteorological Organisation (WMO) had also predicted a weak El Nino event was likely to hit large parts of the world this year, Wong pointed out.

“At the moment it’s not confirmed but earlier indication is that El Nino is definite and that’s why we are monitoring the situation closely now. Whether it’s going to be weak or severe, we can’t say right now,” he told thesundaypost.

The PNAS report said researchers used a new network analysis to predict weather systems up to a year ahead instead of the usual six-month maximum of other approaches.

The model successfully predicted the absence of El Nino in 2012-13, claimed a report on Feb 11 in http://www.riskmanagementmonitor.com.

An El Nino event is said to be characterised by a warmer Pacific Ocean that disrupts the ocean-atmosphere system.

Early this month, the UN weather agency reported the Pacific Ocean could see a warming El Nino climate phenomenon emerge by the middle of this year

However, the WMO was quoted as saying current model outlooks further suggested an enhanced possibility of the development of a weak El Nino around the same time.

The WMO also predicted a slight possibility of a weak and brief appearance of El Nino’s mirror image — La Nina  which cools the ocean — for the first few months of this year.

But overall, according to another report in http://phys.org/news, there is a strong likelihood conditions in the Pacific will remain neutral — with neither an El Nino nor La Nina observed.

The term El Nino is now used to refer to the periods of strong and prolonged warm weather which influences the climate worldwide.

The periods of warm waters in eastern Pacific (El Nino) and those of cooler waters (La Nina) are accompanied by changes of air pressure in the east and west Pacific — these are called the Southern Oscillation. So the whole cycle is now referred to as El Nino Southern Oscillation (ENSO).

El Nino normally affects the weather in large parts of the world. The effects depend strongly on the location and the season.

Meanwhile, a notice on current sea surface temperature and outlook from March to August 2014, displayed in the Malaysia Meteorological Department official website, said almost all models forecast persisting ENSO-neutral conditions through the Northern Hemisphere Spring of 2014, followed by an increased probability of El Nino onset.

Nevertheless, spring is generally associated with lower skill of forecast. Hence, either ENSO-neutral or El Nino conditions may occur after spring.

The notice said based on current atmospheric and oceanic observations in conjunction with model forecasts, ENSO-neutral is expected to persist throughout the Northern Spring of 2014.

Malaysia is in the Northern Hemisphere.

El Nino events are reported to be occurring irregularly about every two to seven years. They may last from 12 to 18 months.

The El Nino event usually begins with the weakening of the prevailing winds in the Pacific and a shift in rainfall patterns. These are associated with extreme weather — floods and droughts — in countries surrounding the Pacific and much further afield.

Prolonged dry periods may occur in Southern Africa, Northern Australia and Southeast Asia, which may mean Sarawak too will be affected.

Normally, the regions where El Nino has a strong effect on the climate are those with the least resources, including Southeast Asia.

Although it remains a speculation, Malaysians or Sarawakians, in particular, should prepare for the worst. To better ready ourselves, it’s important to know what the impact might be.

Human lives are affected in many ways. And rivers are an important El Nino issue meriting serious consideration as the waterways support economic activities, estimated at billions of ringgit, including our irrigated agriculture and water supply in regional areas.

Long droughts can lead to many Malaysians running out of portable water. Even now, with no El Nino event, many states are already short of clean water.

In Sarawak, several villages along Jalan Puncak Borneo in Kuching, which rely on gravity feed, are also badly in need of clean water as the small dams upriver are drying up due to lack of rainfall.

Thus, an El Nino event prediction should prompt consideration of water allocation by the water managers, taking into account the need for environmental flow to ensure the long-term health of the rivers.

Another consideration is the extremely hot and dry weather that heightens envrionmental and health risks. Bushfires, heat waves and dust storms which are common phenomena during El Nino, may have an impact on human health, infrastructure and emergency services.

The community, especially senior citizens and young children, will be most affected by heat stress.

Another thing to look into is natural disasters which could arise from an El Nino event.

According to the World Health Organisation (WHO), the risk of a natural disaster is highest in the years during and after the appearance of El Nino and lowest in the years before.

The WHO reported El Nino was associated with deaths and diseases, most of which resulted from weather-related disasters such as floods and droughts.

For example, the 1997 El Nino droughts which hit Malaysia, Indonesia and Brazil, had exacerbated the huge forest fires. Smoke inhalation was a major public health problem in these countries with countless people visiting health facilities with respiratory problems.

The WHO believed the El Nino cycle would increase the risk of diseases, transmitted by mosquitoes, such as malaria, dengue and Rift Valley fever.

In very humid climate, droughts may turn rivers into strings of pools which are preferred breeding sites of other types of mosquito.

Every year, Malaysia experiences significant and unprecedented heat waves, both associated with long drought and open burning. These kinds of event can easily take place in an El Nino year.

Sarawak experienced the worst haze in the 1997 El Nino event when the federal government declared a state of environment emergency for 10 days after the Air Pollutant Index (API) level recorded a reading of over 900.

Thus, when an El Nino is predicted, consideration should be given by the environment controllers and policymakers to the total ban of large-scale land clearing or open burning in region, not just in Malaysia (or Sarawak) but also in the other countries of Southeast Asia.