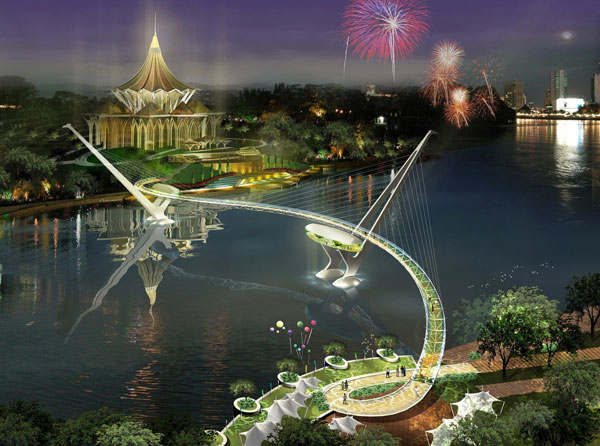 KUCHING: The authorities involved in the construction of the Golden Bridge project should take appropriate steps to ensure the heritage of ‘perahu tambang’ is not ‘killed off’.

A random survey yesterday found that parts of the local community had raised their concern for the ‘perahu tambang’ operators along Kuching Waterfront when the RM35-million pedestrian bridge over Sungai Sarawak is completed.

A quick check at a site in Kuching Waterfront opposite the Old Court House complex revealed that construction of the 400-metre long bridge has started.

According to Kampung Astana Lama resident Hasnan Osman, 40, while the Golden Bridge could improve the state’s image, especially Kuching city, ironically it could lead to erosion of a state heritage, the ‘perahu tambang’ or boats that transport people across the river.

“We have been informed that the ‘perahu tambang’ is one of the main heritage and tourist attractions of the state, and what I am worried is that the Golden Bridge will slowly kill off this heritage.

“This bridge may beautify the view at Kuching Waterfront, however indirectly it may attract tourists or commuters to use the bridge and this may eat into the main source of income for ‘perahu tambang’ operators,” he said Thursday.

Meanwhile, Kampung Gersik resident and ‘ikan terubuk masin’ manufacturer Ismadi Pauzi, 35, said the bridge’s construction proved that Sarawak was capable of standing alongside other developed countries in the world.

“I don’t disagree that upon completion, the bridge would make Sarawak a state with iconic landmarks. However, what is worrying is the fate of boat operators who rely on the ferrying operation as their main source of income for everyday spending.

“Even though the fare is as low as 50 sen, it has been their rice bowl from long before and as far as I know, tourists like to use these ‘perahu tambang’ to enjoy the view along Sarawak River and the Golden Bridge might spoil the current landmarks of Kuching,” he said.

Meanwhile, for Juseiree Jamaludin, 39, and Azniza Azyanny Zakaria, 31, a couple from Kedah, their first step into the city has given them the impression that Sarawak is not a state that is tiresome to visit.

“This is our first visit to Kuching and it is a wonderful experience that we will not forget, and we definitely wish to return here in the future.

“We don’t have much background on the Golden Bridge construction that will connect Kuching Waterfront with the Malay villages across the river, but it is definitely a good effort in beautifying the city,” they said, adding that tourists who wish to cross the river could choose between walking across the bridge or use the ‘perahu tambang’.