Thursday, January 20
You are at:Home»News»Sarawak»Miri police chief on body tattoos allowed in force 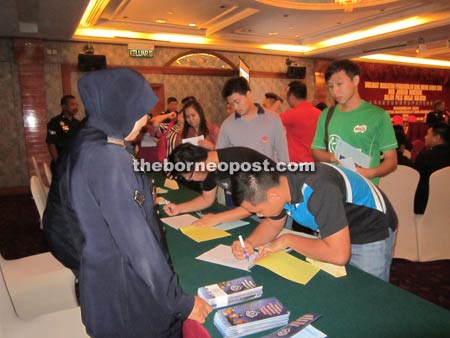 Young Chinese turn up to apply to join the police force as constables.

MIRI: Individuals with tattoos on their bodies can still join the police force so long as the tattoos were traditional or religious ones.

Miri police chief ACP Gan Tian Kee said he too had a tattoo on his right arm.

“Religious tattoos are meant to protect the individual and it is significant for them. PDRM (police) will allow them as long it has something to do with religion. But they must not be heavily tattooed to safeguard and to keep the good and clean image of the force.

The aim of the event was to get more Chinese youths to sign up as police constables.

Meanwhile, Chai said the Chinese community in the state had responded to the special recruitment for constable post positively.

“The response is encouraging and far better than in other states. As of now, 221 applicants, including 64 females, have met both academic and physical requirements.

“We hope more will come forward as the recruitment exercise ends at the end of this month,” said Chai at the talk, whch was held at Grand Palace Hotel.

During the talk, 21 youths, including three females from the city, signed up to join the police force.

Chai said the special recruitment exercise was initiated because the number of Chinese policemen in the country numbered only 1.78 per cent of the total number.

“We hope to recruit around 5,000 nationwide this time around.”

Chai said applicants must have minimum SPM qualification with a pass in Bahasa Malaysia and two credits and four passes in other subjects. The candidate must be at least 1.63m tall for male, 1.57m tall for female, weighing 50kg for male and 48kg for female, with Body Mass Index (BMI) of between 19 and 26, and chest width of 81cm (for male).

“Apart from no encouragement from parents to join the police force, a large number of applicants are unable to meet the academic and physical requirements, where they are either too short or overweight.”

He said successful applicants would have the opportunity to further their study for promotions in their profession, and described the salary as “good and lucrative”.

Lee, who also spoke, said it was important for the Chinese community, especially the parents, to dispel all misconceptions tied to the profession.

“In the past, most parents do not encourage their children to join the police force and they object when their children are interested. This is why there are only few joining in the past. With the presence of Chinese officers here (in the talk) and sharing their experience from being ordinary policemen to high ranking officers, more will come forward and join the profession.”

Lee urged parents to encourage and support their children if they were interested in becoming policemen.