Wednesday, February 1
You are at:Home»Columns»Breaking Barriers»NationA rising star in disability rights movement
For the freshest news, join The Borneo Post's Telegram Channel and The Borneo Post on Newswav. 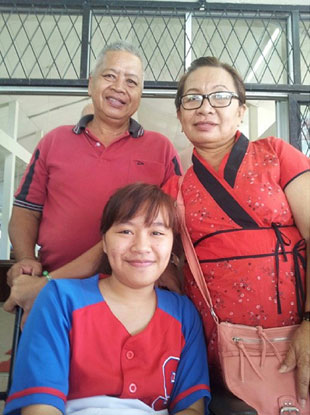 Lidwina and her parents.

AT the tender age of twenty, Lidwina Isidore Andilah from Tuaran, Sabah, is already a seasoned advocate on disability rights. She has travelled to Bangkok, Jakarta, Nairobi and Bali representing Young Voices Malaysia, of which she is currently the chairperson, for regional and global meetings.

Young Voices is a movement of over 1,200 young disabled people from 21 countries campaigning for the rights of disabled people worldwide. This movement is supported by Leonard Cheshire Disability, an organisation based in the United Kingdom with more than 65 years history in supporting disabled people.

“In 1999 when I was five years old, I slipped and fell while playing at my aunt’s house, which was just next door,” Lidwina recounted. “I ran back home and told my mother that my stomach really hurt and I had problem urinating.”

Her parents took her to the hospital immediately, but her condition turned for the worse when she began to vomit persistently.

“The doctor asked me to stand up by holding on to the stretcher. I tried, but immediately fell. I could not feel my legs. There was no sensation at all. From that moment on, the hospital became my second home.”

She was put through a series of diagnostic procedures as the doctor attempted to find out the cause of the paralysis. In the end, the diagnosis was transverse myelitis, which is a neurological condition caused by inflammation of the spinal cord.

“The doctors told me and my family that I was going to be paralysed for the rest of my life. It did not sink in to me then, maybe because I was too young at that time to understand the meaning of paralysis and the challenges that I was going to face.”

Her schooling years were fraught with difficulties made easier by kindness of the people around her.

“I had to be carried to school wearing my ankle-foot orthosis. The students gawked at me. Some said that I was using robot shoes. Although those words did not make me feel sad, they made me feel awkward.

“For three years during primary school, my classroom was located on the first floor. My parents had to carry me up every morning. My classmates will then carry me down after school. The music class was on the third floor. I did not mind if I could not join in because I did not want to trouble my classmates, but they were willing to carry me all the way up too.”

The same thing happened during her secondary school years. The music class was on the first floor and her classmates were ever willing to help her get to the classroom. This went on for three years.

“There were some places in the school that were inaccessible, but ramps were eventually put up to make it easier for me. Although the school was still not completely accessible, they made me feel appreciated at the very least.”

The one major problem that Lidwina faced throughout her years in school was that she could not get into the toilet in her wheelchair.

“I sometimes skipped my catheterisation or just did it once or twice a day. Because of that, I suffered bladder stone that required surgery to remove.”

(People with severe spinal cord disorder usually lose function of the bladder and bowel apart from the limbs. The bladder needs to be completely emptied with a catheter every few hourly to prevent urinary tract infection, reflux of urine back to the kidneys, and stones from forming in the bladder or kidneys.)

As fate would have it, she came down with a bout of urinary tract infection just one day before she was to sit for the SPM. She was determined to take the exam in the hospital even though she was unwell.

“I was so weak at that time. I tried my best. I thought I was going to fail in all the subjects. Thank God my results turned out to be quite good, but I did not pass my mathematics paper because I was overcome by high fever on that particular day.”

After that, Lidwina enrolled in a pre-university course, which she completed last year. She is now waiting for responses to her applications to further her studies at the tertiary level.

“I want to be a psychologist, but I also want to be an interpreter. I want to dabble in music too. I have lots of ambitions to achieve but my priority is to work on disability issues. Since I joined Young Voices and got involved with advocacy activities, I have decided I want to work with disabled people and issues related to disability.”

To Lidwina, her family is her pillar of strength. “They are the reason I never gave up on myself and my studies no matter how many times I felt like quitting. I would not be where I am today without them. They have sacrificed a lot and fought society’s negative perception towards me. I could not have asked for a more supportive family.”

She also credits her former classmates for helping her “survive” the schooling years. They provided her with opportunities and trust in taking up leadership roles, and did not see her as a burden when they had to carry her up and down to classes. As for Young Voices, the members gave her new perspectives in looking at disability and unreservedly shared with her about the intricacies of advocacy and campaigning. And she is now leading them to even greater heights.

On her philosophy in life, this is what she has to share: “I used to remind myself that if I want to achieve something in life, I have to do something that I have never done before. I believe that in order for me to achieve my goals in my life, I have to go through gale and storms. If there is a moment
where I fail, I will keep trying because at the end of the day, I trust that all my hard work will pay off.”

With her steely resolve, there is without a doubt that Lidwina can accomplish whatever goal that she sets her sights on.

The road to advocating for disability rights may be long but age is on her side. Hers, and especially herself, is the new generation that will bring greater changes to make society more inclusive than ever, not only in Malaysia, but the world over.

Comments can reach the writer via columnist@theborneopost.com