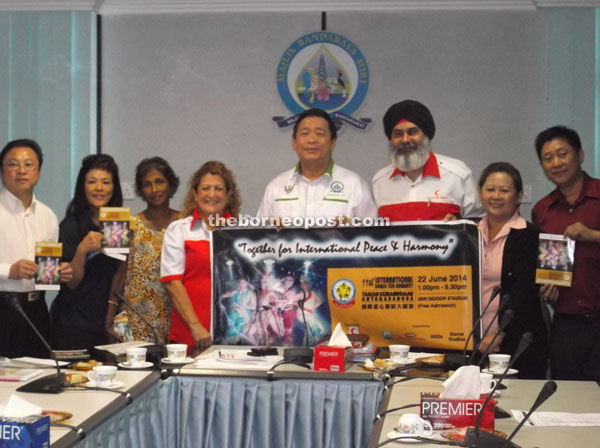 Jacqueline (fourth left) with the organising committee of International Dance for Humanity in a photo call with Lai (fourth right) during the courtesy call at Miri City Council yesterday.

MIRI: The committee of the 11th International Dance for Humanity paid a courtesy call on Mayor Lawrence Lai yesterday, to brief him on the event which will take place on June 22.

According to the event coordinator Jacqueline Buri, the charity event is part of the Miri Chapter of the Malaysian Red Crescent’s (MRC) effort in promoting global peace.

“Since the inception of this exceptional and distinctive event in 2004, it has received overwhelming support in Miri and the surrounding towns. In past years, International Dance for Humanity had been very successful and had attracted up to 3,500 people,” she said.

She added that the wide variety of performances by 45 to 50 multicultural groups will provide a non-stop colourful dances and music.

“In the past year, approximately 1,100 performers took part in International Dance for Humanity which is strongly supported by many NGOs. We would like to encourage more organisations to come and participate in the event,” she added.

Jacqueline said MRC has been building a culture of peace over many years and the International Dance for Humanity is one of the outcomes. It fits into the fundamental principles of International Red Cross and the Red Crescent movement.

“Fundraising is also an important aspect of this event. A donation of RM5 towards the event will entitle the donor to one lucky draw. The funds raised are used for the many beneficial activities carried out by the MRC,” she noted.

Entrance to the event is free and members of the public are encouraged to come with family and friends to witness the event.

Among objectives of International Dance for Humanity are to promote peace and humanity through local, transnational and socio-cultural exchanges; to promote international friendship and understanding through the participation of National Red Cross/Red Crescent to amplify the principle of universality; to enhance racial and cultural harmony as well as unity in our diversified society and to inculcate the spirit of caring society through harnessing the support from the locals and the private sector.