Monday, January 30
You are at:Home»News»Sarawak»Zacharevic moves on to five more masterpieces on Kuching walls
For the freshest news, join The Borneo Post's Telegram Channel and The Borneo Post on Newswav. 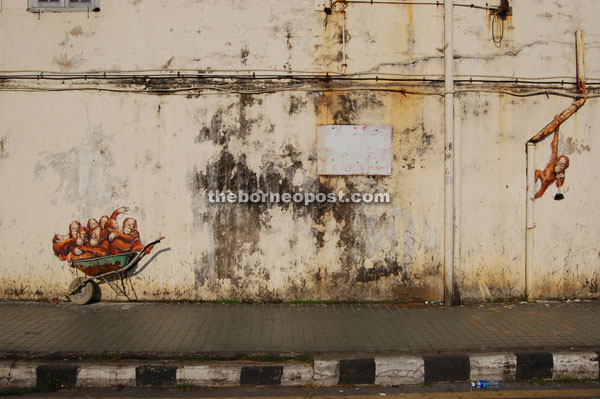 Lithuanian street artist Ernest Zacharevic’s finished interactive mural depicting ‘Eight young orangutans in a wheelbarrow’ and another of a young ‘Orangutan dangling from a pipe’ casually sipping a ‘kopi o peng’ on a wall in Jalan Power in Kuching. 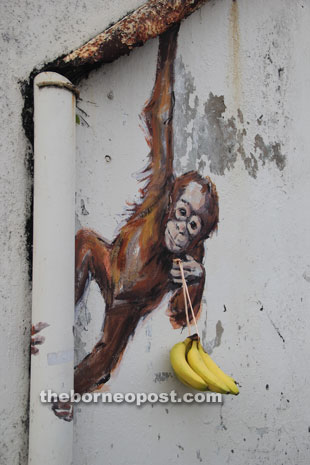 Another Zacharevic masterpiece in Kuching: young ‘Orangutan dangling from a pipe’ now has a bunch of bananas to munch.

KUCHING: Lithuanian street artist Ernest Zacharevic will be targeting the outskirts of Kuching for his next interactive mural, divulged the sponsor Spago Property Sdn Bhd yesterday.

Zacharevic definitely made his mark here as viral images of a runaway wheelbarrow full of eight baby orang utan and another young orang utan hanging onto a gutter pipe in Jalan Power here exploded on social media.

The interactive mural is part of a project entitled ‘Brothers from the Jungle’, which is part of Spago Property Sdn Bhd’s initiative to the community by energising the arts and culture scene in Kuching, according to the press statement.

“By inviting Zacharevic to Kuching, we hope that this will inspire local talents to think outside the box on ways to bring arts to the masses. Sarawak is full of unique wonders, although they are hidden and unexposed, and it has great potential to be a major art hub with the support of art-loving members of the public,” Spago said.

They also divulged that numerous property owners had offered their walls, after they launched the ‘We Are Looking For The Wall’ campaign on their Facebook page.

“It was very important to us that the wall must be in a very easily accessible public location, as we want the whole community to be involved,” the property developer firm said.

Zacharevic is famously responsible for murals such as ‘Little Children on a Bicycle’ in Penang’s Georgetown, as well as the controversial Lego snatch theft setup in Johor which was erased.

So to recap on tourism history in the making on a bustling Sunday morning in Jalan Power near Lebuh India, an air of excitement mounted with the presence of the world renowned street artist.

With the sun blazing, the young Lithuanian under a huge umbrella facing a shop wall along Jalan Power which formed the canvas for his three dimensional interactive mural.

Choosing the easily recognisable and lovable orang utan, which can only be found in the ancient rainforests of Sarawak and Sabah as his subject, Zacharevic, 27, started painting at 11am.

The first piece dubbed ‘Ape-scape’ uses an actual wheelbarrow sliced in half as a prop which people can hold and pose for pictures. He then swung on to a corner of the wall and painted an orang utan swinging from a real gutter fixed to the wall.

On of his audience, Zarina Abidin in her 20s, told Bernama that Zacharevic’s murals would promote Sarawak to potential tourists.

“People will surely take pictures of these murals as remembrance and I feel this will be a new attraction in Sarawak,” she waxed.

Alfred Lee was excited about Zacharevic latest pieces in Kuching. “I’ve seen his work in Penang and taken photos of them. I can’t wait to add the murals in Kuching to my collection,” he said.

According to a ‘tip’ from a Spago Property spokesman, he will create another five masterpieces in various locations in the city.

“Apart from the Sarawak River waterfront area, we have scouted five other locations for Zacharevic’s murals,” he said.