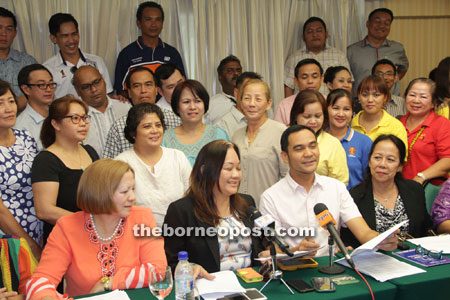 As for the women, they were from the 10 divisions in the southern region namely Pending, Batu Lintang, Satok, Muara Tuang, Bengoh, Tarat, Opar, Tanjung Datu, Kedup and Tebedu.

Khairuddin said the 5,263 youths members joining Teras represent a third of SPDP’s youth movement members in Sarawak, while the 10,000 women members who quit SPDP were two-thirds of SPDP women members in the state’s southern region.

They both said SPDP headquarters can expect to receive their resignation letters the soonest possible.

According to Khairuddin, more divisional Youth chiefs were expected to announce their resignations soon in order to join Teras.

“Our objective of this action is to move forward. There have been many speculations, misunderstandings and quarrels (within SPDP) in the newspapers and social media. I think that has jeopardised not only the party, but the Barisan Nasional name and reputation.

“I think this (Teras) is the best formula otherwise the ship cannot move, and it stays in the yard forever for maintenance,” he said.

Khairuddin said on behalf of former SPDP youth members, they thanked Chief Minister Tan Sri Datuk Amar Adenan Satem for giving his pledge of support to Teras, and willingness to accommodate this new party in the State Barisan Nasional.

“And I believe we have the support soon from the federal government, from the Prime Minister (Datuk Seri Najib Tun Razak who is also BN chairman),” he said.

However, when asked by reporters on the strong objection from Sarawak United People’s Party (SUPP) against Teras’ admission into BN, Khairuddin said he believed a solution could eventually be found by the top leaders.

“As long as we follow the right process, we have high confidence that our federal government will accept us. On the objection from SUPP, we will leave it to the top leadership and BN supreme council to find a solution,” he said.

Despite leaving SPDP, they still want to wish good luck to their former colleagues in SPDP. Stressing there is no permanent enemies in politics, he said they look forward to working together again in the same BN boat, and he insisted what is happening now is due to ‘ideology separation and management’.

Chan said Teras would strengthen BN as the coming together of leaders and members from SPDP and SUPP who want to move forward in a new direction.

“As for SPDP, we just want to say let bygones be bygones. We (the former women members) just want to move ahead,” she said.

Mawan who is also Saratok MP and Pakan assemblyman, together with 10 other elected representatives, announced they had joined Teras at a press conference after the end of the State Legislative Assembly sitting last Thursday.