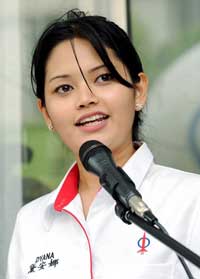 Dyana Sofya, who had previously denied it, said she had helped her mother conduct a membership registration for Perkasa in 2008.

“I was not aware whether my mother was a member or not at that time, and at that time I was studying,” she told a news conference here.

Dyana Sofya said her mother had asked her to help with the registration exercise.

“Yes, at that time she was involved with Perkasa but for few months; after that she left because she no longer believed in Perkasa,” she said.

Dyana Sofya was asked to comment on the circulation of a  photograph of her helping Yammy at the launch of the Perkasa website and a membership campaign in 2008.

On her mother’s position as a committee member of Perkasa, she said her mother was a member of the pro-tem committee and had left the organisation before the first general meeting.

“I am not sure whether she was a registered member with Perkasa before the AGM or not … my mother is an Umno member; I am not. Maybe she was involved in Perkasa, I was not. Maybe this should not be an issue,” she said.

Several media portals had quoted Dyana Sofya as denying that her mother had joined Perkasa.

Meanwhile, newspapers yesterday reported that Gopeng Umno Wanita head Datuk Hamidah Osman said Yammy was one of the pro-tem leaders of Perkasa and was its first head of the women’s wing.

Hamidah said the information was gleaned from Perkasa secretary Syed Hassan Syed Ali who said that Yammy was on the pro-tem committee until the first annual general meeting in March 2010 before resigning.

She claimed that up to now there had been no record to show that Yammy had resigned as a Perkasa member.

Dyana Sofya is facing Gerakan president Datuk Mah Siew Keong in a straight fight between the DAP and the Barisan Nasional in the Teluk Intan by-election, polling for which is on Saturday.

The seat fell vacant following the death of the MP, Seah Leong Peng of the DAP, of cancer on May 1. — Bernama