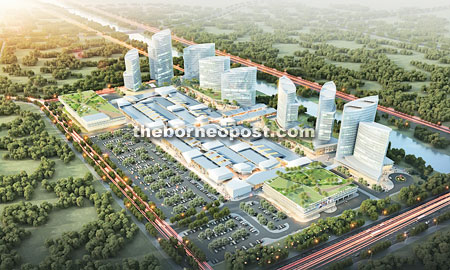 An artist impression of the Penang Designer Village and hotel with a gross development value of over RM300 million and is expected to open by late 2016.

KUCHING: Local-based PE Land Sdn Bhd(PE Land), the management and operator of tHe Spring Shopping Mall here is embarking on expansion to develop more shopping malls in the coming years to further grow its retail business.

Fresh from opening its newly refurbished food court on the first floor of tHe Spring Shopping Mall earlier this month, the company will be developing an outlet mall across the sea in mainland Penang known as Penang Designer Village (PDV) in the second half of this year.

However, with the ever changing retail environment, it might be challenging as the economy brace for a tighten budget, stricter lending policies, rising cost of living, more competition and impending goods and services tax (GST) set to put a dent in spending habit.

“We have a long term view for our malls as it must be maintained properly to ensure that it is clean, safe and comfortable for shoppers as such re-investing to improve our facilities is a must,” said PE Land managing director Ling in an interview with The Borneo Post.

“We are committed to bringing in a new experience to the people of Sarawak and tourist alike because we ourselves demand it,” he added.

With its recent win from the Ministry of Tourism and Culture declaring tHe Spring Kuching as the Best Shopping Mall for Sabah and Sarawak, it seems befitting for all its effort.

“I am optimistic that this is part and parcel of a cyclical economy of which it will eventually stabilise over time.

“What is more important is that the government understood what it needs to do so that we will have a stronger more competitive economy,”  said Ling. 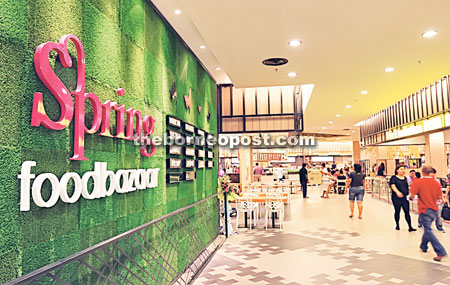 Fresh from opening its newly refurbished Food Bazaar, PE Land’s success can be felt as shoppers pack the one of its kind eatery with approval.

He continues to highlight rising costs which was one of the factors pushing PE Land towards expanding its portfolio of assets, “otherwise it may be too expensive to enter the market later when the market booms,” Ling added.

Besides that, he said with strong strategic partners, PE Land is well positioned to capitalise on its expansion plan in the future.

One of those developments is in Bandar Cassia, Batu Kawan, Penang of which it will built a 400,000 square feet premium outlet concept known as Penang Designer Village and hotel with a gross development value (GDV) of over RM300 million and is expected to open by late 2016.

The land consists of 40 acres whereby future phasing of development may include high rise residential properties.

Other developments on the road map will include Bintulu and Miri here on home turf.

“We are very excited this year as there are a lot going on for us,” Ling said, referring to the multitude of events and new global tenants set to make its entry into Kuching starting with the opening of COACH New York tomorrow (June 1) in time for the Gawai Festival celebration and soon the yearly community The Spring Live Active Run on June 15 to promote a healthy lifestyle and sportsmanship” said Ling.

He also said there will be more new tenants which are set to improve the shopping offering for the city in the future to spur the growth of the retail industry.