Thursday, October 28
You are at:Home»News»Sarawak»Dog’s barks alert houseowner to fire 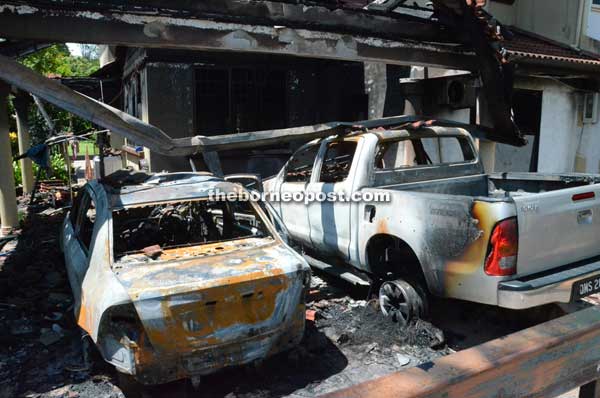 Wong’s vehicles parked at the porch that was destroyed by the fire.

The houseowner, in his 70’s, was alerted to the fire by a dog barking at his car porch around 3am.

“There were three people living in the house when the fire broke out – my daughter, her toddler and I,” said the owner who wished to be known as Wong.

Wong’s daughter is a lawyer.

He said hours earlier, he was sitting inside the house, drinking coffee.

“I heard my dogs barking non-stop outside…. when I went outside to check, I saw fire engulfing my two vehicles at the porch,” said Wong.

He rushed back to the house to wake up his daughter and instructed her to bring her toddler to flee the house from the backdoor.

“I told her to climb up  the ladder to get help from the next door neighbour,” he explained.

The fire destroyed Wong’s two vehicles and part of his car porch.

The porch’s ceiling was destroyed by the heat.

He was stunned to see the fire had engulfed Wong’s vehicles.

“I tried to put out the fire by pouring water on the flames…but it was already too big,” said Mahen.

One fire engine from Miri Fire and Rescue Department dashed to the scene upon receiving a call around 3.41am. The fire was brought under control at 5.19am.

No fatality was reported in the incident. The cause of the fire has yet to be determined.