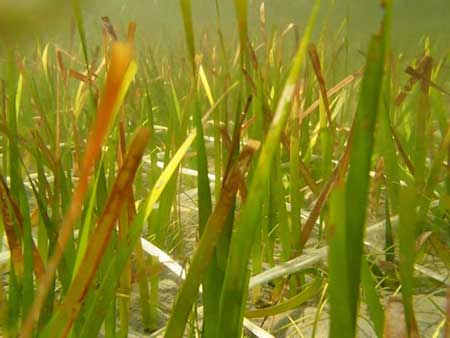 Seagrass – the mainstay of the dugong’s diet.

THEY are believed to have been at the origin of mermaid legends when spotted swimming from a distance.

Now the remaining populations of this seemingly clumsy sea mammal called dugong, commonly known as sea cow, are at serious risk of extinction.

Many countries throughout the world are making every effort to protect this elusive marine mammal, associated with legends of women with fish tails.

Sarawak too is moving into the same direction – to save the species.

Historically, dugongs were common in shallow coastal waters of East Malaysia and hunted, particularly in the old days.

Today, their occurrences are rather occasional.

The protected waters and plentiful seagrass meadows are perfect for the dugong.

The ungainly sirenian feeds almost exclusively on seagrass although now and then, it does snack on molluscs and crustaceans. As it feeds, it stirs up plumes of sand, leaving meandering trails that can be seen from the air.

The dugong is listed as one of the totally protected species in Sarawak under the Wild Life Protection Ordinance 1998.

Its deputy general manager (Protected Areas and Biodiversity Conservation Division) Oswald Braken Tisen said the state government was committed to ensure the continued existence of the dugong in the area for posterity.

And in response to the government’s commitment, he added, SFC, in collaboration with a few higher learning institutions and international organisations, had taken some proactive actions to protect and conserve the seabed off Kuala Lawas, one of the feeding grounds for dugongs and turtles.

In fact, Braken pointed out, seagrass and dugong conservation in Kuala Lawas was initiated by the Forest Department back in 1994 after it monitored the movement of turtles.

Together with students from Universiti Malaysia Sabah (UMS), a marine mammal survey was carried in 1999.

“The dugong was first spotted in Kuala Lawas in 2000. Before the study, we thought it had become completely extinct as there were no reports of sightings.

“The last dugong death was recorded in Sarawak during the Japanese occupation,” he said.

In 2004, together with UMS students, SFC conducted a multi-discipline wild life expedition in Kuala Lawas to find out what the state had in the area.

Arising from that expedition, SFC requested for federal funding, and in 2007, conducted a boat and aerial survey along the state’s coastal waters and managed to record more than 10 individual dugongs and other marine mammals in Kuala Lawas.

Braken said the SFC-endorsed boat survey in 2008-9 by Dr Nicholas Pilcher observed over 30 individual dugongs off Kuala Lawas and in Brunei Bay.

In 2011, to enhance the seagrass and dugong conservation in Kuala Lawas, SFC organised the Southeast Asia regional workshop on the dugong in Lawas, funded by the UN Environment Programme and Convention on Migratory Species (UNEP/CMS).

The objective was to come up with recommendations on the distribution of dugongs, their habitats and risks from fisheries in the region – at the same time establishing collaborations on conservation and research programmes with renowned institutions. 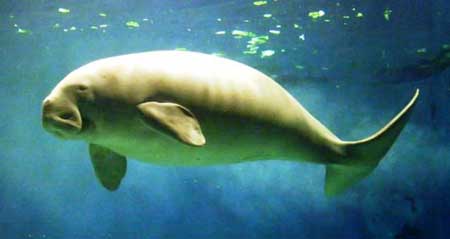 The dugong is listed as a totally protected species in Sarawak under the Wild Life Protection Ordinance 1998.

From the workshop, Malaysia requested for funding from the Global Environment Facility (GEF) to support the conservation of marine biodiversity and ecosystem in the country.

“The latest information I have is that the GEF has approved in principle some funds for Malaysia to enhance conservation of the dugong and seagrass in its waters, including in Kuala Lawas,” Braken revealed.

He said efforts to conserve the seagrass and dugong conservation in the area did not stop there, adding that SFC and Universiti Malaysia Terengganu (UMT) signed a memorandum of understanding (MOU) last year.

The MOU will provide a framework for both parties to enhance research and conservation measures through the exchange of technical information, joint cooperative studies and research, as well as, industrial technology transfer in the field of endangered marine species.

Braken said SFC had decided to work closely with UMT because the latter is known for its marine conservation work.

He hoped from such collaboration, UMT would become a platform for other agencies to participate in the conservation of seagrass and dugong in the whole area off Kuala Lawas and in Brunei Bay.

“The dugong does not belong to us alone. During low seagrass season in Kuala Lawas, it may be feeding somewhere in Brunei or the Philippines and therefore, every country in the region should play its part in conserving seagrass.

“On our (SFC) part, we have worked with other member countries to protect our seagrass meadows.

“But even with protection, others will still kill them – not just the seagrass but also the dugong. So it’s our hope Kuala Lawas will be gazetted as a totally protected area.”

Braken said recommendations had been made to the State Forest Department to gazette Kuala Lawas as a national park.

“It’s also important the water source going to the seagrass meadows in Kuala lawas is protected as sedimentation poses a threat to them.”

He pointed out that protecting the seagrass meadows, the dugong’s main source of food, is essential because without adequate sustenance, the dugong will not breed normally.

He noted that the seagrass beds are also nurseries for fish, turtles and other marine life.

SFC had organised a few wild life awareness programmes in Lawas and in 2012 had recruited over 30 wild life rangers.

“Today, many people, including the wild life rangers, have become the ambassadors to promote our seagrass and dugong conservation in Kuala Lawas,” Braken said.

Although not a targetted species now since local fishermen know it’s protected by law, by-catch is still the number one issue.

It is believed rising pollution, coastal developments, river traffic, bad fishing practices and hunting have contributed to a decline in the fortunes of the dugong — both in Sarawak waters and around the world.

Dugongs are particularly vulnerable to boat strikes as they come to the surface to breathe, putting them directly in the path of watercraft.

Boats travelling at speed or in shallow waters over seagrass beds or coral reefs pose the greatest threat.

Today, dugongs need to rely on smaller seagrass meadows for food and habitat. When the seagrass habitat becomes unsuitable for foraging, dugong populations are displaced and the mammals face greater threat.

Other direct threats include incidental mortality in gill fishing nets and shark meshing.

The dugong has a long rotund body and a tail or fluke for propulsion. Adult dugongs can reach lengths of more than three metres and weigh up to 420kg.

Dugongs have relatively poor eyesight, so they rely on the sensitive bristles covering the upper lip of their large snouts to find seagrass.

The dugongs have been hunted for thousands of years for meat and oil.

The International Union for Conservation of Nature (IUCN) lists the dugong as a species vulnerable to extinction while the Convention on International Trade in Endangered Species limits or bans the trade of derived products.

How about that connection with mermaids?

The word dugong derives from the tagalog term dugong which was, in turn, adopted from the Malay word duyung – both meaning lady of the sea.

Another assumption is that when swimming, the dugong, which has a streamlined body, use its whale-like fluked tail and front flippers to glide forward in slow graceful movements and this probably caused early sailors to liken the species to mermaids.

Biologists also note that female dugongs have large teats at the base of their flippers.

According to the website of the UN Environment Programme (UNEP), any threat to this huge migratory herbivorous mammal should be of critical concern to the billions of people who rely on the oceans for their livelihoods.

“If the dugong, a key indicator species, is declining, then the coastal environment that provides protein in the form of fish, and income in terms of tourism, is also being degraded,” it states.

Dugongs may live for 70 years or more and are slow breeders.

The female does not begin breeding until 10-17 years old and only calves once every three to five years, providing seagrass and other conditions are suitable. This slow breeding rate means dugongs are particularly susceptible to factors that threaten their survival.

Dugongs feed almost exclusively on seagrass, a flowering plant found in shallow water areas. An adult will eat about 30kg each day.

As dugong feeds, whole plants are uprooted leaving tell-tale tracks behind. They will also feed on macro-invertebrates such as sea squirts.