Sunday, November 28
You are at:Home»News»Nation»Three sets of govt agenda to protect employees — PM 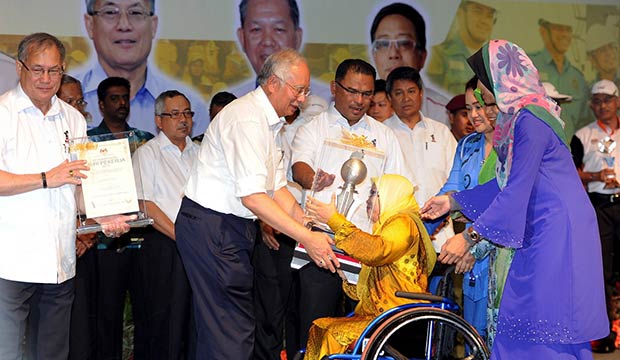 Prime Minister Datuk Seri Najib Tun Razak said through the agenda to strengthen the national labour market, the government focused on aspects related to the rights and welfare of workers, including the establishment of a minimum wage policy enforced on Jan 1, last year.

“Despite the numerous reactions, the higher employment growth and lower retrenchments had given the impression that most companies are capable of adjusting to the minimum salary policy,” he said when officiating the 2014 Workers Day gathering at the Melaka International Trade Centre here yesterday.

Najib said, based on the survey by the Malaysian Employers Federation, the average salary of the private sector rose to 6.6 per cent last year as compared to six per cent previously.

The prime minister said the agenda to update the social security network involved a study and review of the labour acts in a holistic manner, with all suggestions of improvement discussed in the spirit of tripartism until an agreement was arrived at by all parties.

“A modern system of labour legislation should be created to guarantee the protection of the social security of every group of workers, and at the same time give the needed space and elasticity to the industry to expand,” he added.

He said the agenda to harmonise industrial relations was the pre-condition towards the creation of a commerce-friendly environment which would spur the national economic growth.

Workers unions, he noted, must continue to cooperate closely with employers to harmonise the enterprise in the country.

In the meantime, to turn out innovative workers towards a developed nation, Najib outlined three more principles, namely, creative and innovative culture; value-added and competence and collaborative work, and not in their own silos or vents, as addition to the five principles he announced on Civil Servants Workers Day in Kedah on May 1.

The five principles are knowledgable, trustworthy, culture of best practice; patriotic spirit and culture of result built on outcome.

Meanwhile, Najib said the rate of national unemployment remained low at 3.1 per cent in the first quarter of this year, which indicated full manpower use.

“This performance is much better compared to other countries such as Indonesia which recorded 5.7 per cent in February, 2014 and the Philippines, 7.5 per cent in January, this year,” he added.

He said, based on a report from Bank Negara, the employment market in the country for 2013 remained encouraging, with the number of manpower increasing to 13.65 million people, as compared to 13.1 million the previous year. — Bernama

Previous ArticleNajib: Implementation of GST will allow govt to consider requests of civil servants
Next Article Whither these government quarters?