Thursday, July 7
You are at:Home»News»Sarawak»Penans in Murum facing a myriad of issues — Suhakam commissioner 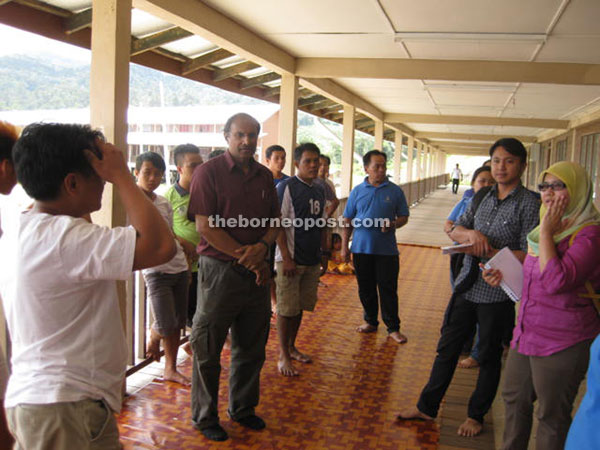 Nagayam (left) and others listening to issues raised by the Penans.

KUCHING: The resettled Penans near Murum Dam are complaining that the access roads in the area are in a bad condition, and this makes it difficult for parents to ferry the children, even on four-wheel drive vehicles.

Human Rights Commission (Suhakam) commissioner James Nayagam said this was among the issues raised during his recent visit to the area. His trip was facilitated by Sarawak Energy Berhad (SEB).

Nayagam said the headmaster and assistant headmaster of the primary school built for the resettlers told him about absenteeism of pupils due to the unsafe roads, especially during a heavy downpour.

“The headmaster proposed that a hostel be built near
the school to overcome the
problem of absenteeism. Currently, there are 120 children and 15 teachers in the school,” he said yesterday.

Accompanied by a team from SEB, Nayagam said he also visited the Long Malim resettlement area.

They also went to Long Wat at the Tegulang relocation site and had a dialogue with Murum Penan Development committee chairman Labung Paneh.

Nagayam said another issue raised by the Penans was that the longhouses at the resettlement areas had structural defects.

There was also no proper refuse disposal system for household refuse, while the children
lacked playground facilities, he added.

He said the Penans also complained that the hours of electricity supply through the generator was too short.

“Currently, it is between 6pm till midnite. They are hoping it will be for 24 hours.”

Nayagam said the Penans also told him they were promised RM850 in monthly compensation (RM250 in cash and RM600 in food aid), but the delivery was inconsistent.

The Penans preferred to be given RM450 cash and the rest in food aid. They also told him they were promised 15ha of land per family and agriculture farming assistance before the project began, but until now they had not been given the land.

“Suhakam hopes to organise meetings with various stakeholders to convey the issues in order to seek measures to overcome them. We will be contacting the various agencies within a month of the visit,” he said.

Previous Article‘Pengalih bridge to be completed on schedule’
Next Article Fatimah: School principal not unlike captain of a ship