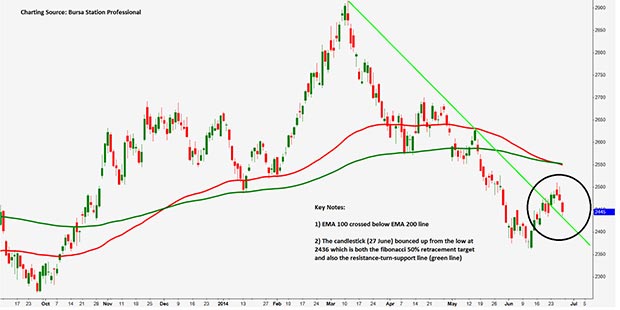 Malaysian palm oil futures ended slightly higher for the week although it closed lower on Friday due to easing crude oil prices which was possibly lower than the need for biodiesel conversion using palm oil and weakness in comparative soyoil markets.

However, open interest-based on Thursday increased to 192,700 contracts from 187,337 contracts last Thursday.

The sudden rise in exports was one of the many reasons why FCPO rose earlier during the week before price was pressured down from 2,511 to as low as 2,436 on Friday. Spot ringgit strengthened for the week to 3.211 compared to last week’s at 3.223. The ringgit appreciated due to expectations that Malaysia’s central bank was expected to raise interest rates next month.

Moreover, a disappointing US gross domestic product (GDP) during the first quarter raised speculation that the Federal Reserve might not raise interest rates anytime soon.

In addition, many traders and investors are paying attention to the crisis in Iraq due to expectations of higher dollar demand for oil imports as intensifying crisis in Iraq would highly likely disrupt crude supplies from the world’s second-largest Organisation of the Petroleum Exporting Countries (OPEC) producer.

Normally, stronger ringgit will discourage foreign buyers to purchase palm products as it only boosts small profit margins. Earlier this week, FCPO prices shot up to a near one-month high of RM2,511 due to the crisis in Iraq which had sparked fears of supply disruptions. This might make palm a more attractive option for biodiesel feedstock.

However, demand for biodiesel waned as crude prices fell.

Dorab Mistry, a leading vegetable oil analyst, believed that palm oil prices could drop between RM2,300 to RM2,500 per tonnes over the next few weeks due to Indonesia’s disappointing uptake of palm-based biodiesel.

Meanwhile, the current hot and dry weather across Malaysia has capped losses which kept palm prices in a tight range between the 2400 to 2500 level.

Normally, short spells of dry weather can hinder growth of palm fruit over a period of time.

Some market players believed that the heat could be early signs of the drought-inducing El Nino weather pattern, which is expected to hit Southeast Asia later this year.

Based on the chart, price managed to go as high as 2,511 for the week but price was capped which then pressured price to as low as 2,436.

It nearly hit our resistance at 2,515 but the selling pressure was stronger. Currently, we are monitoring low levels at 2,436 where we believe it is the 50 per cent Fibonacci retracement level (2,362 to 2,511).

We also drew a long resistance-turned-support line (light green) where price managed to hit the line before it closed at 2,445.

Based on our analysis, should price bounce above this level, price may retest our resistance line at 2,515.Meanwhile, based on our technical analysis last week, we observed the EMA 100 and EMA 200 lines and discovered that the EMA 100 had crossed below the EMA 200 line which to many; is called the ‘death cross’ which can be a ‘sell sign’.

However, due to its lagging nature, we suggest that investors pay attention in the coming weeks especially on FCPO volume, rather than view it as the determinant to decide position inside the market.

Previous ArticleGold steady after US consumer confidence data; platinum up
Next Article Military spending on the rise in Brunei