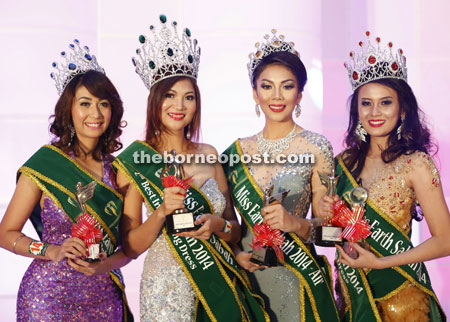 She went home with RM2,000 cash, a crown, a trophy, a return air ticket to Kuala Lumpur and a sash.

Second place went to Natasha Jalius Benggon who took home RM1,500 cash, a crown, a trophy, a return air ticket to Kuala Lumpur and a sash.

The top three winners will represent Sabah at the national level Miss Malaysia Earth 2014 which will be held in Ipoh on July 20.

The finale was held at Pacific Sutera ballroom on Saturday, where winners of other subsidiary titles were also announced.

The Miss Sabah Earth Best In Eco Wear category was won by Kong Sue Mei while Janet Fabian and Lojuki were in second and third places respectively.

Organizing chairman Victor Bryan in his welcoming address said with the theme ‘Beauty for A Good Cause’, Miss Sabah Earth is a pageant that not only showcases the beautiful young Sabahan ladies but also aims to educate and impart the knowledge of environmental protection and conservation that are crucially needed by our society.

“Contestants will become the ambassador for Mother Earth in advocating environmental issues that have to be addressed by all of us.

“Other than strongly emphasizing on environmental protection programs, the pageant also aims to showcase and promote tourism destinations. It is indeed setting a legacy of beauty and responsibility,” he said, adding that this is the second year that his team from Asia Pro Entertainment has been entrusted with the important mission to search for Miss Sabah Earth.

During the event, all the 15 finalists went through four rounds of competition, in which they wore casual attire in the first and second rounds, while finalists paraded eco wear which were designed by themselves.

In the third round, the finalists put on their beach wear, while in the final round, the contestants wore evening dresses prepared by themselves, with the theme ‘Miss Earth Evening Dress Inspired’.