KUCHING: India’s aggressive purchase of logs from other major log producers in the world has resulted in firm average selling prices for tropical logs, which is a boon for Sarawakian timber producers such as Ta Ann Holdings Bhd (Ta Ann). 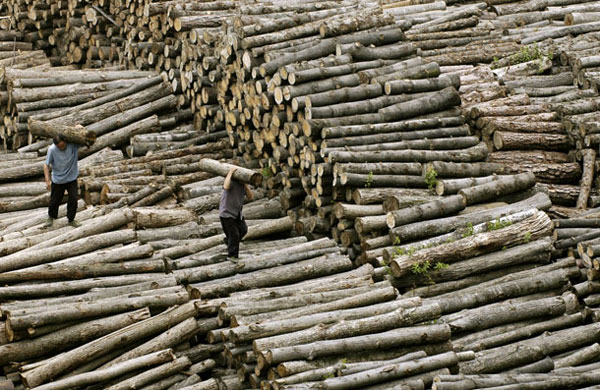 Affin Research continues to see rising demand for logs from India due to its ‘on-going needs for construction and renovation activities’. — Reuters photo

Analysts from Affin Investment Bank Bhd’s research arm (Affin Research) observed this, adding it continued to see rising demand from India due to its ‘on-going needs for construction and renovation activities’.

“As such, we believe the average selling prices for logs will likely to remain firm at US$250 to US$260 per cubic meter for 2014, underpinned by tight global supply of logs and sustained demand.”

Affin Research also explained that Ta Ann’s palm oil division remains a key earnings contributor to the group, at 70 per cent of the Group’s total profit before tax (PBT) in 2014-2016 earnings.

The research house said this should be underpinned by two factors namely, increasing maturity of its plantation estates; and rising fresh fruit bunch (FFB) and crude palm oil (CPO) production as well as yield.

To recap, Ta Ann Tasmania Pty Ltd has entered into an agreement with the Australian Government in June 2013 to reduce its peeler wood supply entitlement held under the contract with Forestry Tasmania.

In return, the Australian Government had agreed to compensate Ta Ann with A$28.6 million.