Sunday, November 28
You are at:Home»News»Sarawak»Mawan: Teras, UPP a political necessity 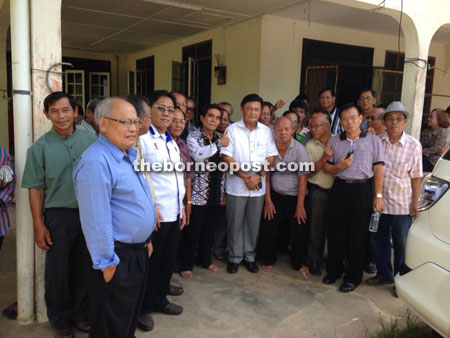 Mawan (centre) with several supporters during a photo-call.

Mawan, who is also Pakan assemblyman, likened the two parties running on a ‘plus gear’ for the state BN, to the ‘Bubu’ (fish traps) and ‘Raga’ (baskets).

The senior minister and Minister for Social Development made the remark at the residence of Penghulu Latan Ambau at Jalan Paip here on Saturday when refuting propagandas and political rhetoric by leaders of Sarawak Progressive Democratic Party (SPDP) and Sarawak United People’s Party (SUPP).

The propaganda that elected representatives (or YBs) linked to Teras and UPP were outside BN and thus could not give out government development projects and funds were lies calculated to mislead the voting public, he stressed.

He said SPDP and SUPP leaders should have been smarter in reading the body language of top BN leaders and, therefore, should stop making propagandas and political rhetoric that could mar the reconsolidation process of BN, especially with the next state election looming.

He also explained to those present the need for Teras and UPP to enter the state’s political scene.

Mawan, who faced a mutiny in SPDP when facilitating the state BN’s reconsolidation effort by bringing back four sacked YBs into the party, decided on May 15 to join Teras.

“However weeks later Anyi returned to SPDP while George was offloaded and remained an independent YB.

Teras will proceed with their triennial general assembly at their new headquarters at Jalan Tun Ahmad Zaidi Adruce next Saturday. However their grand welcoming at Imperial Hotel was postponed to another date after the Hari Raya Puasa season.

Among the 300 people present at the function in Saratok on Saturday were Teras secretary-general Banyi Beriak, several Penghulu, Pemanca, longhouse and village chiefs and local councillors.