Wednesday, February 8
You are at:Home»News»Nation»Air quality ‘unhealthy’ as haze obscures skies
For the freshest news, join The Borneo Post's Telegram Channel and The Borneo Post on Newswav. 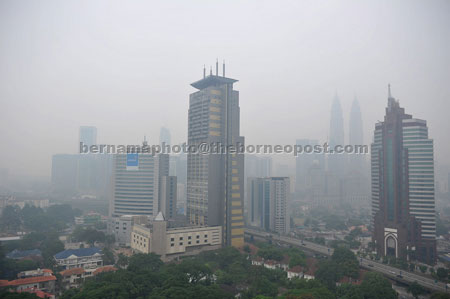 Kuala Lumpur residents wore face masks as protection from the choking smog, while visibility was low.

A reading of above 300 signifies ‘hazardous’ air.

In Indonesia, the National Disaster Management Agency deployed a chopper to conduct water bombing to West Kalimantan on Borneo to tame 268 so-called hotspots detected in the province as haze also shrouded skies there and on Sumatra island.

In Riau on Sumatra, hundreds of military and police personnel as well as firefighters used water cannons to put out fires that stretched over more than 850 hectares of land.

“Hundreds of fire-fighters and volunteers are trying to put out the fire, but the fire, set alight by individuals and groups, are more intensified still.”

Haze is an annual problem during drier summer months when monsoon winds blow smoke from fires mostly on the huge Indonesian island of Sumatra, which lies across the Malacca Strait from Malaysia and Singapore.

The fires have been largely blamed on palm oil firms using the illegal but cheap method of burning vast tracts of rainforest and peatland to clear them for planting.

Indonesian authorities had warned last month that Malaysia and Singapore could be hit by haze again after a huge jump in forest fires in Riau province, which was at the centre of an air pollution crisis last year. — AFP

Both Malaysia and Singapore were effected, with readings hitting 750 in one town in southern Malaysia in June last year.

This was the highest seen in the Southeast Asian country for 16 years, causing a declaration of emergency in several districts, school closures and a regional diplomatic row.

Malaysia – usually known for its tropical heavy downpours – this year has also been plagued by drought, leading to water rationing, particularly in Selangor, the country’s economic hub, which surrounds the capital. — AFP