Wednesday, February 8
You are at:Home»News»Sarawak»Former enemies meet as friends 40 years later
For the freshest news, join The Borneo Post's Telegram Channel and The Borneo Post on Newswav.

KUCHING: It was a reunion that rekindled ‘what if’ on Sunday when two men who negotiated the Peace Talk in Simanggang (now Sri Aman) met after more than 40 years. 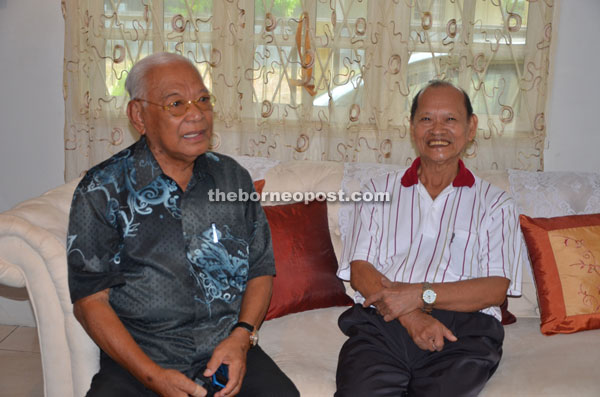 Alli (left) and Bong recollecting their days some 40 years ago when the latter paid a Hari Raya visit to the former’s house. — Photos by Wilfred Pilo 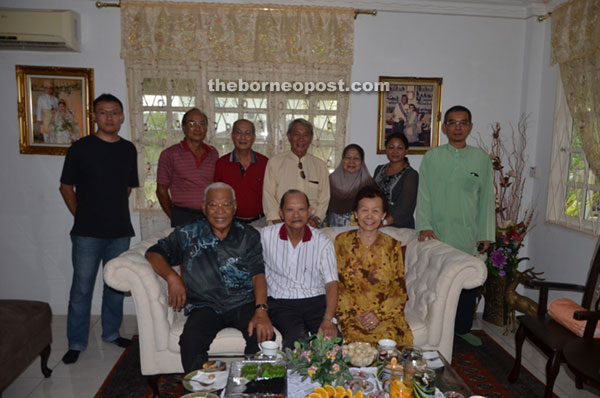 Bong (centre), Alli (left) and Fatimah (right) with their friends and families at Alli’s Hari Raya open house on Sunday.

“It was amazing how we can talk so freely about the day we met for the first time on Oct 18, 1973 in Simanggang (Sri Aman) for the Peace Talk and as if we were old friends,” Alli told The Borneo Post at his residence in Taman Sourabaya Indah at Jalan Bako here yesterday.

He said it took them two solid days to discuss before the Memorandum of Understanding (MoU) was signed on Oct 20, 1973 between Bong Kee Chok representing Paraku and the then chief minister of Sarawak Datuk (now Tun) Abdul Rahman Yaakub representing the federal government, which finally brought peace and political stability to the state.

“Sarawak, 40 years after the Sri Aman Peace Talk, has changed by leaps and bounds. Mega projects like Bakun Dam, SCORE, Bintulu Port, Tanjong Manis among others would be not possible if not for the talk and later MoU,” he enthused.

And if the atrocities of the communist continued until today, he opined, development would be impeded and with problems over Native Customary Rights (NCR) persisting throughout the state, the communists could have succeeded in recruiting locals into the organisation.

“I have to say that I am relieved that the Peace Talk took place before the NCR problems ever cropped up,” he sighed.

Alli said he could imagine if the atrocities continued, all small towns and rural areas would not be developed and people would continue to be scared.

He was therefore relieved that all these towns like Miri, Bintulu, Bintangor, Sarikei, Sri Aman and other smaller towns now had flourished with economic activities and people had jobs and money.

Bong, on the other hand, said he was very happy that Alli was tasked to do the negotiations at that time.

“I found him to be friendly, sincere and an honest person. Alli was never aggressive or officious,” recollected the 78-year-old Bong.

He revealed that he found it was easy and comfortable to deal with Alli as the negotiations were done in a ‘friendly’ atmosphere.

Bong recalled that he secretly visited Alli and his wife soon after the Peace Talk at the government quarters near Sarawak Club before midnight during a Hari Raya celebration.

Finding out that Bong was a nice person and as their relationship became closer, Alli’s wife Fatimah asked him and his friend to visit them after Hari Raya.

Fatimah remembered that Bong’s sister-in-law had even offered to do acupuncture on her due to her asthmatic condition then, which she did twice.

Later Bong also revealed that he and his friends paid Alli, who had just turned 80 in June, a visit when he heard that the latter was not very well.

The threat of the communist insurgency in Sarawak ended in late 1990 and during the historic event in 1973 both men were in their prime. Alli was 39 and Bong 37 years of age.