Wednesday, December 7
You are at:Home»News»Sarawak»Ministry targets 40,000 hectares of cocoa by 2020

KOTA SAMARAHAN: With prices of cocoa expected to remain high in the foreseeable future, the Plantation Industries and Commodities ministry targets 40,000 hectares of the crop nationwide by the year 2020. 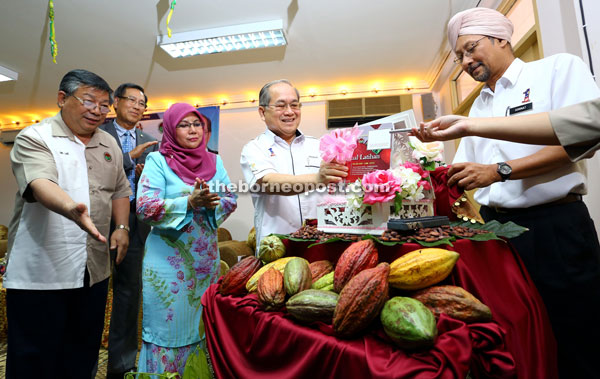 “The demand for cocoa and cocoa-based products is high now, and the selling price of cocoa now is RM9,500 per metric tonne. Currently, to satisfy the demand for cocoa, at least a million metric tonnes is required, and this high demand is expected to hold strong for a few more years,” Uggah said at a press conference after officiating at the Training of Facilitators (TOF) Cocoa Safe Project 2014’ at the Malaysian Cocoa Board (MCB) research and development centre here.

“Malaysia is currently the fifth largest cocoa grinder in the world after the Netherlands, Cote d’Ivoire, United States of America and Germany, and the largest in the Asia Pacific region.

“The export of our products such as cocoa butter, cocoa powder, cocoa paste, chocolates and cocoa-based confectionaries have contributed RM3.6 billion to our nation’s income,” Uggah said.

He said there used to be about 400,000 hectares of cocoa plantation in the nation but the area plunged to 12,000 hectares in the year 2012 due to a price drop which forced farmers to switch to other more viable crops.

The TOF course is the first of its kind in the state and is funded by the Standard and Trade Development Facility (STDF) supervised by the International Cocoa Organisation (ICCO) and implemented by the Centre of Agricultural Bioscience International (CABI) and MCB.

The two-year project (from Nov 2013 until Dec 2015) is to create awareness of Sanitary and Phytosanitary Standards (SPS) for improved quality of Malaysian cocoa beans and products as well as improvement in food safety.

“I hope that this programme would be beneficial and impart more knowledge especially for small farmers on the systematic use of insecticide. This programme will also allow participants to learn about the rules, laws and standards of other countries, especially importers.

“This will also indirectly give a guide on the requirements on compliance to export cocoa, which will lessen the probability of a product not being accepted in the import market,” Uggah said.